A wealth of ghostly stories and haunted tales surround the Sea Islands, one of the most popular being The Land’s End Light. 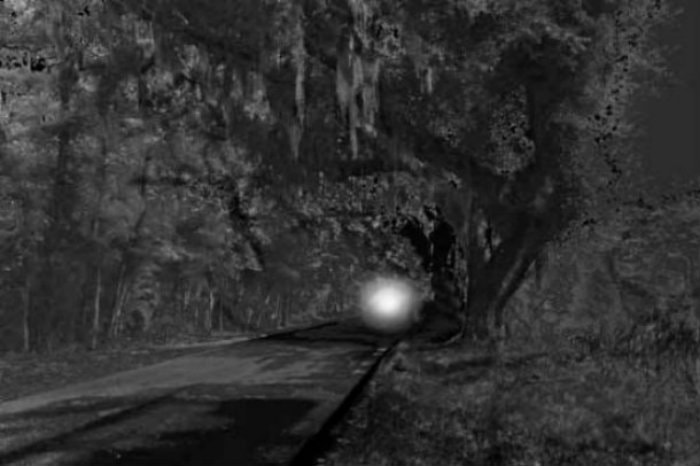 Traveling down Land’s End Road on St. Helena Island during the daytime has a majestic feel to it. Lined with old haunting Oaks draped in blankets of Spanish moss, the history engulfs your senses. Driving down the road at night however, gives one another sense; fear. Some might even say that the mind starts to play tricks on you…or does it?

There have been many reports of an eerie light floating over Land’s End Rd. What is that light exactly? Some claim it is the ghost of a murdered Confederate soldier who was on patrol along Land’s End Road in 1861, on watch for Union soldiers who were expected to invade St. Helena Island. A Yankee soldier (or soldiers) sneaked up behind him and cut off his head, and he now goes up and down the

road in search of it, eternally, carrying his old iron lantern.

the purchase of illegal whiskey. There were several brawls and gunfights, and one fight resulted in the death of Private Frank Quigley. Private Quigley is rumored to be the source of the ghostly Light, seen floating down the dark road leading to Fort Fremont.

Others claim it`s the ghost of a slave, sold away from his family, who`s come back to hunt for them, though the tales predate the American Revolution. Yet another story says that the light is from the ghost of some runaway slaves that were caught and hung from one of the large oak trees that line this road. An even different account states that a bus wrecked on this road in the late 1940’s killing the driver and a couple passengers, variations of the story also claim it was a bus full of young children. Whichever story one choses to believe there are many reports that several people see the light every year. The light is most usually reported between the Chapel of Ease and the “Hanging Tree”.

If you find yourself here after dark, park beneath the branches, turn off you headlights and wait for the Land’s End light. It begins in the distance like a single headlight coming down the road towards you, but as it grows closer you realize it’s much larger and not nearly as bright. Some say as it speeds by it leaves you charged with static electricity. One woman said that her hair grew stiff and made crackling noises as the Land’s End Light passed her car. She felt that the Light put out an electric charge. Others would suggest a supernatural influence. In fact, a large number of eyewitnesses agree that the Light is in fact a ghost.

People have reported being overtaken by the light as they drove back towards Lady’s Island direction. No one agrees on what the cause for the light might be, though it is pretty much agreed upon that the light is real, and even somewhat reliable. Some even claim the light appears every night, if you’re patient enough to wait for it.

The light has been the cause of at least one documented accident, Paranormal author Nancy Roberts captured a picture of the light

and published it in one of her many books about the ghosts of South Carolina. At least two people have died in auto accidents chasing down the light. About thirty years ago, sheriff’s deputies could count as many as one hundred cars parked along the road on a single night. Whether it be to catch a glimpse of the infamous Land’s End Light or to debunk the tales told by so many, The Land’s End Light continues to draw folks from all over in hopes of an unforgettable hair-raising experience. The Land’s End Light remains a mystery … and a local attraction for skeptics and believers alike.

If you find yourself out that way in search of the Light, ask yourself, what is it that you are really seeing? 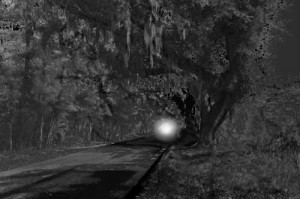