The Man With the View: Beaufort's Stephen Brown

As bridge tender for the Woods Memorial Bridge, Mr. Brown has a real honest-to-goodness bird’s eye view of the Intracoastal Waterway, the downtown waterfront, Factory Creek, passing ships and the big blue sky.

Fifteen feet above the roadway and forty-five feet above the Beaufort River at high tide, the bridge house sits on top of the world of Beaufort in the octagonal green building. Up there, Mr. Brown has a real honest-to-goodness bird’s eye view of the Intracoastal Waterway, the downtown waterfront, Factory Creek, passing ships and the big blue sky. After 35 years of working for the Beaufort County Fire Department/EMS, Mr. Brown retired and got the job of bridge tender for the Woods Memorial Bridge. His space has a beautiful wood-paneled ceiling, a large desk, a bathroom that is supplied by a 500-gallon water tank and a 500-gallon septic tank. There are oodles of buttons and controls on a panel, and a view that will take your breath away.

Although he says he doesn’t notice it anymore, it feels like being on a train with the movement the cars make crossing the bridge. When the bridge swings open, it mimics those first few seconds on a carousel ride; it’s a magical place! What does he like best from his aerie perch? “I love looking at nature and talking to boaters from all over the world. It’s a very relaxing job and being retired makes it even better!” What is it like up there when it storms? Mr. Brown loves the storms, “You’re encircled by windows, the rain sounds on the tin roof, the lightning is all around you; it’s quite a show! In here, you are completely surrounded by transformers and steel, but there is a big lightning rod on top, so God willing, it works! It takes a lot of faith to be up here in a storm.”

The Woods Bridge basically opens every hour on the hour, with some exceptions, for pleasure craft. The bridge will open any time for 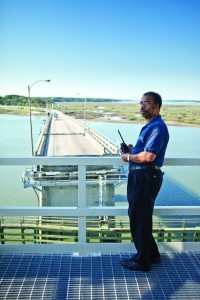 commercial vessels. There are two separate channels under the bridge, each is 90 feet wide and 300feet long; there is 30 feet of clearance at high tide. Four steel wedges under the center section of the bridge allow that part to drop down about four inches in order for it to clear the roadbed when it swings open; after that happens two huge gears engage and actually turn the bridge. It takes three minutes for the bridge to fully swing open, an average bridge opening takes six to eight minutes unless there is excessive river traffic, or a barge is underway.

Interestingly, when the tugs and barges go underneath the bridge, they have to go at full speed because the current is very strong. Mr. Brown explains, “ Many of the barges carry fuel oil and are headed to Charleston or the MC Air Station. Dredge tows are three stories high and pull up to five barges with thousands of feet of pipe line trailing behind so they can take up to twenty minutes to pass through. The length of the vessel, the speed of the current, and the lack of speed of the vessel make it difficult to line up with the bridge and it is not uncommon for them to hit the fender. An impact is very dangerous, not only for the bridge, but also for the bridge tender. “You never get over the fear when you see one of those big barges head toward you!” Additionally, Mr. Brown states, “This bridge is
one of the most expensive pieces of equipment the State owns.” There are people who call the bridge tender to find out why the bridge is open, why it is open so long, how long it will be open, why it is open now, when will it close? 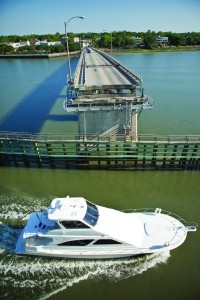 Many of us find bridge openings a nuisance, a delay in our day. We forget or don’t realize, that the bridges are simply a crossroad on a waterway. Mr. Brown points out The Coast Guard controls the bridge opening schedules and they feel that the water was here first, then the bridge was built and it impacted the waterway, so the waterway should come first.”

The son of the late Harold and Audrey Brown, Mr. Brown attended the Robert Smalls School from elementary school through graduation in 1969. His family lived on Newcastle Street next to the St. Helena Episcopal Church and the Cherokee Inn, which is now the Rhett House. “My father and mother raised us with God fear and wanted us to strive to be better than they were God blessed my parents to see us succeed and He has blessed me to see my children also succeed.”

Of his childhood days, Mr Brown reminisces, “There was a dock at the end of Bay Street where my dad used to take me out on the 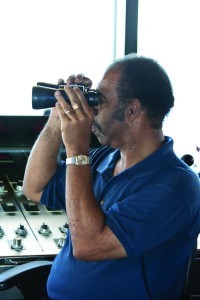 river in a bateaux. I like the water but I never learned how to swim. We played hide and seek in the graveyard at the St. Helena Church, I know all those tombstones! When I was ten years old, I cleaned the store windows on Bay Street; in high school I worked at the United 5 & 10 Store.” Reminiscing about those wonderful old-time variety stores, Mr.Brown declares, “I loved 5 & 10’s!”

“I had four brothers and four sisters and I always knew that I wanted to follow in my father’s footsteps and be a firefighter. Until 1970, Beaufort had segregated fire departments, the all white Washington Fire Company, and the Pioneer Fire Company, both of which merged into the Beaufort Fire Department. When I was little, the Fire Chief, Charles Haig let me look at the fire trucks. I joined the Pioneer Fire Department in 1966. In 1969 I integrated into the Beaufort Fire Department as the first African American. I was raised to believe that people are people, but I learned that if their color is different, then they are distinguished by that.” What was it like to be the first African American in that all white environment? Mr. Brown explains “There is prejudice in all races. John Harriott, the Fire Chief, said to me, ‘I hired you for the work you do.’ In 1970, the City got a brand new fire engine, I got to drive that engine in the Water Festival Parade! After two years I was Firefighter of the Year; I went through the ranks to Assistant Chief of The Beaufort Fire Department then I went over to Parris Island Fire Company. When I retired in 2001, I was Senior Medical Technician and Fire Captain.”

When not atop the bridge, Mr. Brown’s interests are varied. He is Associate Minister at the Lady’s Island Baptist Church; he was ordained by the Board of Presbytery in Philadelphia, PA in 1975. “I’m always doing something, I’m on call here at the bridge, I’m involved with my church, and I spend time with my grandchildren.” He and his lovely wife, Marilyn, have nine children and twelve
grandchildren between them. “We were high school sweethearts; we met again thirty five years later and were married in 2003.”

A love of music started at an early age for Mr. Brown; he was eight when his parents bought him a Lone Ranger guitar. “When I 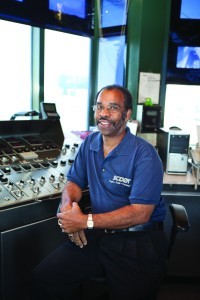 would play on the street corner outside the Sea Island Motel on the corner of Bay and Newcastle Streets, people would give me money. I love to sing; everyone tells me I sound like Elvis! Growing up, I was in the choirs at the Tabernacle Baptist Church and in school. I

sang in the talent show at the Water Festival for four years beginning in 2000; I won second place twice and third place twice. This year I {participated} again, for the last time.” A member of the Lady’s Island Baptist Church Male Chorus, Mr. Brown proudly states, “We are known all over! I just love singing, it gives me an inner peace. One of the greatest songs of worship is How Great Thou Art; when I perform that song, I always ask God to let people be blessed. It is my favorite song, and the one most requested of me and the Male Chorus, which is evident by the standing ovation after each performance.” His rich, deep voice reverberates off the walls of the church and fills your heart with awe. Elvis may still be with us after all!

It’s perfectly clear that Mr. Brown loves life. His cheerfulness is infectious and his gregariousness is returned in kind – he talks to pedestrians as they cross the bridge, boat operators stop, smile and wave and often exchange a greeting. 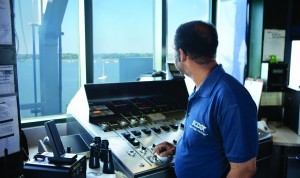