8 Track: The Sounds of the 70's a powerful and nostalgic look at decade

By Mary Ellen Thompson | 8 Track – The Sounds of the 70’s at USCB Center for the Arts is sure to be a sellout – so don’t wait until the last minute to get your tickets! Friday, September 6 is the opening night and to celebrate, the audience is invited to come dressed in 70’s outfits for the Costume Party. So comb your closets and break out your platform shoes, bell-bottoms, white disco suits, tie dye shirts and dresses, and win a prize.

A chronology of the 1970’s, the play begins in the early 70’s to a country divided by the Vietnamese War. Opening with Karen 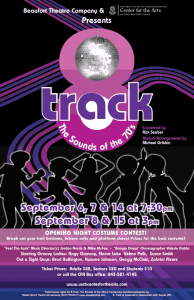 Carpenter’s We’ve Only Just Begun, which was released in 1970 but was the top hit on American Bandstand in 1971, the final number is the 1979 hit Whenever You Call Me Friend, with 40 some songs in between. The music follows the discontent of the war to the acceptance of the returning soldiers, followed by the concept of free love, and culminating in disco; and illustrates the turmoil of the times, both the negative and the reawakening.

The music is powerful and nostalgic, the dancing is fabulous, and the cast of seven (with a surprise cameo guest appearance) are superb and enthusiastic. Bonnie Hargrove is the Producer, Jordan Norris and Mike McFee are the Musical Directors, Valerie Hobbs the choreographer, Brad Ballington and Dusty Connor are creating the 70‘s look with hair and makeup, respectively.

It’s easy to believe that Gregg McLain is John Travolta; when I saw him dance in a rehearsal I thought “Wow, there’s John Travolta!” before I had any idea that was even his character. Intrigued, I asked each member of the cast to answer a question about the play.

ESPB: “What is your favorite memory of the 1970’s?
VELMA POLK: “That would have to be the births of my sons, Donnie and Ben. They were raised on the great music of the 70’s and 80’s and I’d like to think that they were inspired to become professional musicians because of this.”

ESPB: “What has been the most fun part of this production, and why?”
ANGY CHANCAY: “The best/most fun part of this production has been all of the rehearsals; working with everybody has made me ridiculously happy! I’ve found 3 new moms and 3 new dads and I’ve just got to say I love every single one of them, and have loved rehearsing with them. So yes! The rehearsals.”

ESPB: “Who is your favorite character in this production, and why?”
GREGG MC LAIN: “My favorite character would have to be my own. That is not because of what I bring to the character, but rather because this character so closely brings to life the Travolta I so idolized in this decade.”

ESPB: “What is your biggest excitement or fear about the opening night?”
SUSAN SMITH: This is my first time on stage in over 30 years, and I’m performing with some fabulous professional singers. I’m just hoping to hold my own. Karaoke singing is a lot different than being on stage singing and dancing in wigs and costumes!”

ESPB: “How do you feel about your costume/hair/makeup?”
ELAINE LAKE: I love, love, love it!! Brad Ballington, Pat Wilcox, and Dusty Connor are absolutely amazing. They completely transform us into our characters. I feel and look like a woman of the 70’s. I walk in feeling like Elaine Lake…I walk out looking and feeling 100% like my character.”

ESPB: “Have you performed on stage before? Why did you audition for 8 Track?”
F. KWAME JOHNSON: “Yes, I have. I have performed in more than a few shows. On Broadway and Off Broadway, also Off-Off Broadway (LOL). It has been a long time since I have had the opportunity to sing on stage. When Bonnie asked me to audition, I was hesitant. But afterward I felt good about the show. I am having fun!”

ESPB: “What is your favorite music in the show? What memory does it hold for you?”
BRAD BALLINGTON: “My favorite is probably the disco music, it brings back memories of wearing the crazy, strange clothes and working all day. Then going home and taking a disco nap and hitting the streets about 10 p.m. and getting home at 2 a.m.; going to work the next morning and repeating it the next day!” 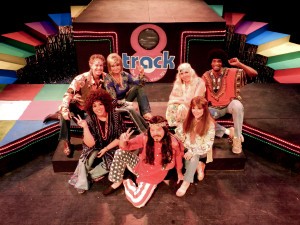