By Libby Ricardo | While our friends in the Northeast might longingly look to the Lowcountry as a haven of temperate weather, we here in Beaufort are ready to put this winter behind us, where it belongs.  March may not have come in quite as strong as a lion, but it has nagged us with overcast and rainy days that dampen Beaufort’s beauty.

Shakespeare Rep is eager to hurry along warmer days and sunnier dispositions with its ambitious production of A Midsummer Night’s Dream.  Debra Charlton, Artistic Director of the company, has compiled a cast of local talents and guest artists from Nashville, New York, Chicago and even as far as London, to perform in one of the theater canon’s most beloved comedies.

Charlton has chosen to set the production in Newport, Rhode Island in 1967, the infamous Summer of Love.  As such, the piece is infused with all the trappings of this time; vibrant clothing, fantastic music, and of course, a major cultural divide between the older and younger generations.  This discord begins the play, as Egeus drags his only daughter, Hermia, to the presence of the Duke to demand intervention.  She has fallen in love with Lysander, a Dylan-esque folk musician, and Egeus demands that she instead turn her favor to Demetrius, 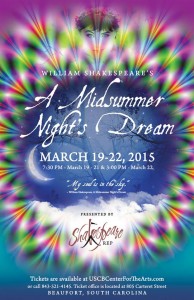 the dependable young Republican.  At this same time, the entire community has turned their attention to the upcoming nuptials of the Duke and Hippolyta.  Even Titania and Oberon, rulers of the Fairy Kingdom, have journeyed from the Far East to behold the festivities.  They too are suffering from discord brought upon by lack of compromise (those who are married might understand this all too well) and as such, set in motion magic and mischief that entangle the entire lot of characters.  Perhaps the greatest winner and loser of the hijinks is Nick Bottom, one of the Rustics who have been charged to organize entertainment for the wedding reception.  Bottom, loveable and verbose, is changed physically but not philosophically when the fairies give him the head of a donkey.

Santiago Sosa, who played the famed Scot in Shakespeare Rep’s inaugural production of Macbeth, returns to the Beaufort stage as Oberon.  Sosa, who serves as Artistic Associate to the company says, “It feels great to be a part of something new and growing.  Overall, I enjoy being a part of the company; I

enjoy the growth together.”  When asked what aspect of the show would be the most enticing to theater patrons, Sosa postulated, “The music, the comedy, the new faces, the romance, the magical whimsical family friendly story.”  The conversation then turned to the future of Shakespeare Rep.  “We are eager to continue this company.  More shows, more classes, more community.”  He was quick to speak of his dedication to bringing the theater he loves best to the Lowcountry.  “It’s nice to be able to do something relevant to our lives spoken in such poetic language.  The themes are universal and the words are timeless.”

Ultimately, A Midsummer Night’s Dream offers not only fun and fantasy, but also characters that are remarkably familiar.  Perhaps the reason we love Bottom so much is because we see ourselves in his overzealous enthusiasm and unbridled passion for self-promotion.  The young lovers feel love and loss and recovery as acutely in the play as I did when I first fell in love.  Shake off those last remnants of the winter time blues and join Shakespeare Rep for a night of summer love.

A Midsummer Night’s Dream runs March 19-22 at the USCB Center for the Arts.  Tickets are $15 for Students and Seniors, $20 General Admission.  To purchase tickets, visit www.uscbcenterforthearts.com.