By Mary Ellen Thompson | It’s that time again – when the music is everywhere and we can, hopefully, be outside or in to enjoy all our favorite bands. For those of you who remember this column from last summer, no explanation is necessary but there is a new twist – I’m going to start with Thursday nights and take you all the way through Sunday!

For those of you who are new to this column, or simply don’t remember – here is how it started. When I was growing up, my family spent the occasional summer at the Jersey shore where a bunch of us kids would grab towels and embark upon a late night adventure of “pool hopping” where we would sneak in and out of the motel pools along the beach. In later days, “pool hopping” gave way to “bar hopping” which needs no explanation.

Now my favorite activity is “band hopping” (which in all honesty may be no different than bar hopping but with musical accompaniment).

Tonight – Thursday, April 17th, the Remnants will be at Fat Patties starting at 7pm, so grab a burger there and then wander downtown to hear 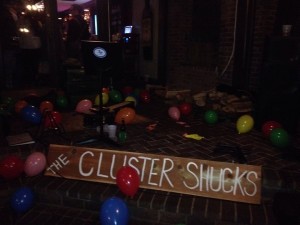 Kirk Dempsey and the Bull Grapes at Q on Bay from 8 – 11. (Q on Bay, by the way, has a great selection of late night bites, which is good to know when you need a little something after all the other kitchens have closed.)

Friday night has a wonderful line up but thunderstorms and rain predicted so think about whether or not your venue is outside and decide accordingly. The Cluster Shucks will lead off the evening starting at 6pm at Lowcountry Produce, SWIG will be at Bricks on Boundary at 7:00, then you can head on over to the Back Porch Grill at 7:30 for the Warsaw Island Boys. At 8:00 Michael Smith will be playing at Steamers, from there you can wander on out the Foolish Frog for Kirk Dempsey and the Bull Grapes who will have started at 7 but playing until 11. For a late night bite, finish up downtown at Q on Bay with Matt Eckstine who will play until the wee hours of the morning.

Saturday takes us a little farther afield; on Saturday afternoon the Sometimes Later Band will be playing at the Daughters of Bluegrass 38th Bluegrass Festival at 3:00 in the Mossy Oak Music Park in Guyton, GA; that festival starts this afternoon and runs until Sunday. The Sweetgrass Angels will be performing in Fly Me To The Moon at USCB Saturday evening, and Zack Shaffer will be playing at Q on Bay starting at 9:30 – so that’s perfect for after dinner or the other events.

Happy Easter to all the Easter Bunny lovers on Sunday. Vic Varner will be at Saltus from 6:30 until 9:00. So – how perfect that band hopping and bunny hopping coincide for the first time this weekend.

Enjoy and be safe.

This is, by the way, a short list of all the music venues in Beaufort over the weekend. Feel free to choose your own hopping trail, but do remember to put a little something in the band’s tip jar. 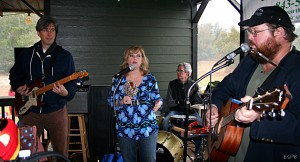