By Whitney Rauenhorst | In school we’re taught the Pledge of Allegiance: “I pledge allegiance to the Flag of the United States of America, and to the republic for which is stands, one Nation under God, indivisible, with liberty and justice for all.” It’s been like a song in our hearts since the day we entered elementary school and for a good reason too.

Commemorating the adoption of the United States flag in 1777, 236 years later, Beaufort celebrated Flag Day last night with the Knights of Columbus and City of Beaufort co-hosting the patriotic event this year. Hundreds of patriotic citizens gathered around Henry C. Chambers Waterfront Park, as boy scouts and girl scouts helped hand out the American flag so all could wave that good ole red, white and blue.

Michael Kelly, a member of the Knights of Columbus, said, “The flag is a single symbol that we rally around as a nation through the 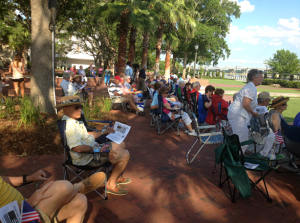 good times and the bad, especially now with the ongoing the Global war on terrorism, and especially in the community where so many of our men and women are deployed in combat. It’s important for us to all remember the one thing we stand behind.”

Created in the mid-90s, last year the city invited the celebration back to the park. Why? The venue. “It’s centrally located, and it’s the heart of Beaufort. Where else can you have this view? It’s downtown Beaufort. I mean, this is what it’s all about,” Sir Knight Steve Mendoza said.

Beginning with a prayer by Father Paul MacNeil from, St. Peter’s Catholic Church, the event turned to a few remarks by Mayor Billy Keyserling, a reading about the history of the flag from Sir Knight Steve Mendoza, the pledge of allegiance by Rep. Shannon Erickson and the boy scouts and girl scouts, and a patriotic sing-along, directed by Thomas Fierro and performed by the adult choir of St. Peter’s Catholic Church.

The choir performed some  American classics including “America, the Beautiful,” “Yankee Doodle,” and “God Bless America” as the crowd joined in and waved and waved their flags. 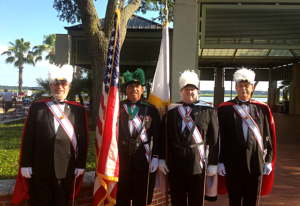 For tourist Jane McKinney, she was downtown with her husband when she heard the sound of familiar songs and decided to check out the event. “I think [this event is] a good thing [to help] represent our flag and celebrate America,” McKinney said. “It’s America and we celebrate those who have fought for our lives.”

Sir Knight Steve Mendoza and Reulito Gonzalez couldn’t have agreed more. “It’s the honor of the American flag. What better way to do it then have the public come out? You have so many people — veterans, the general public — and anybody can come out and honor the American flag.” “It’s about America. [It’s a day] to stop and say, what’s the origin of this flag? What does it stand for,” Gonzalez said.

Flag Day reminds the nation that the flag is one symbol, no matter what religion, political stance, gender or race you may be. That it’s “one nation under God.” It’s a day to help honor those men and women — veterans, retired or active duty military — and celebrate how far our nation has come. “It’s important that we show the colors and stand behind our fighting men and women and behind our nation,” Kelly said. 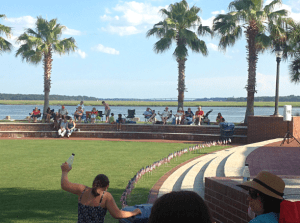 Whitney Rauenhorst is currently a senior English major at Clemson working for The Tiger newspaper as an editor and writer and has also worked at Clemson’s Digital Press. Whitney is involved in community volunteering with Gamma Sigma Sigma’s Epsilon Beta chapter. She has also studied abroad in Glasgow, Scotland…but this summer she’s back in Beaufort preparing for her senior year, the GRE, and life after college.  Whitney will be interning with eatstayplaybeaufort.com for the summer.