By Owen Plair | Leaving my hometown of Beaufort, SC to embark on the opportunity of a lifetime guiding on the Ponoi River in Russia was a new chapter in my life as a fly fishing guide. Being born and raised in Beaufort is what set fire to my passion for fishing and for the surrounding waters, and therefore led to my career as a fly fishing guide at Bay Street Outfitters. Being offered this job to guide in Russia on one of the most famous Atlantic salmon fishing rivers in the world was a huge opportunity and something that little did I know would change my life forever.

Back in May I jumped on a plane and flew over to Russia to start my new job as an American Fly Fishing Guide for the Ponoi River Company here on the Ponoi River, which is located on the Kola Peninsula of Russia. As we started to land the helicopter at camp, the

reality of a dream coming true started to kick in. The camp was beautiful, the staff were all awesome, and the river was packed full of Atlantic salmon waiting for a fly to swing through them! My first week was spent setting up camp, getting the boats ready, and helping out the other 40 staff members with different projects.

We have people from all over the world that work here as guides, camp staff, chefs, kitchen staff, a doctor, a masseuse, mechanics, and helicopter pilots. It takes that many people to make this place what it is; one of the best Atlantic salmon Lodges in the world.

Watching it all come together was an amazing experience.

After getting everything ready we had our first group of 20 guests arrive for the first week of fishing. The guests fly in via helicopter every Saturday and leave every Saturday, so the vacationers are constantly changing throughout the weeks.

My first week on

the water was spent shadowing other guides with guests and learning from them first hand how to guide on the Ponoi. Whether it was running the jet boat, setting anchor, learning the drifts, netting fish, and really understanding in person how to fish here. During those 6 days I learned more about fly fishing for Atlantic salmon than anything I ever learned in grade school!

Everything here is completely different than fishing at home and that was one of the most exciting parts for me; learning a completely new fishery.

I’ve been guiding here on the Ponoi for the last 4 months and cant say enough how awesome this fishery is. Atlantic salmon are one of the hardest salmon in the world to catch on the fly and here in Russia it’s some of the best Atlantic salmon fishing in the world. Catching 10-30 fish a day is a regular and any salmon fisherman out there knows that’s unheard of with Atlantic salmon.

I have had the opportunity to guide anglers from all over the world including folks from Russia, Sweden, Finland, Norway, Scotland, Ireland, France, Italy, Germany, Brazil, Lithuania, Estonia, South Africa, Canada, and many other countries.  That’s one of my favorite parts because it’s an amazing feeling to fish with people from all over the world, and learn about all the different countries. Not to mention the feeling of putting them on fish all the way over here in Russia.

I also had 4 of my customers from Bay Street Outfitters come here to fish which was a ton of fun being able to guide familiar faces from Beaufort and also even had a guy from Charleston.

The weather here isn’t freezing cold and actually a lot warmer than I originally thought. During the spring and summer we were wearing shorts and sun shirts, just like back home. Now fall is approaching, and things are starting to cool down a bit but still between

The first 3 months I was here it was 24 hours of daylight which took some getting used to but now its starting to get dark at night which. oddly. kind of makes you miss the 24 hours of daylight. Soon the northern lights will start to show and I cant say how excited I am to see it for the first time!

Living in the Russian Tundra is so much different from the sea islands of the Lowcountry, but yet it seems to have its own unique beauty here. Tall cliffs, beautiful trees, rushing falls, and small streams that trickle into the Ponoi River.

Its great how everything here is so much different than back home but makes you realize how beautiful Beaufort truly is.

There is one other American guide and the rest of the guide team is from Russia, Argentina, Ireland, and England, so it’s an honor to be here representing the United States… and the Lowcountry.

One of my favorite things about guiding all these people from all over the world is being able to tell them about where I’m from. Explaining the Lowcountry to people is like painting a piece of art in their minds, and being able to share my passion for where I’m from simply through words is always fun.

Learning Russian, drinking vodka, eating new foods, and simply living in Russia has been an amazing experience. Everything here has been better than expected and cant wait to share stories after the season is over. I will be here until October 7th and looking forward to being back home to the place I have always called my own; Beaufort, SC.
Keep an eye out for my next piece talking about the fishing here, and comparing it to back home in the Lowcountry. 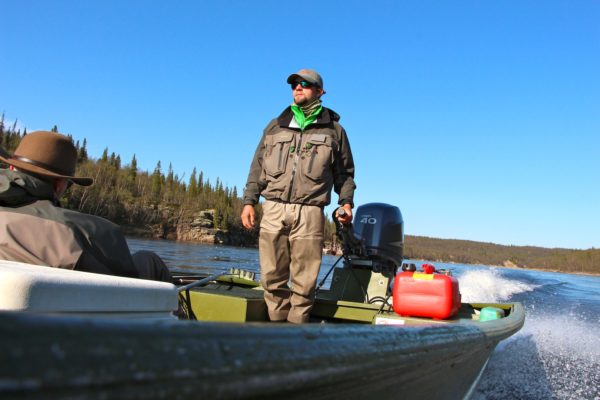