When Andy Holloway was in Beaufort Middle School, his Social Studies teacher, Jennifer Woods, showed his class the movie, “Glory,” about the 54th Massachusetts Regiment.  And she told them about another group of African Americans, born here, who fought for the Union even while they were still slaves.

These men, the 1st SC Volunteers, were not officially mustered in until January 1, 1863, the same day that they were freed with the reading of the Emancipation Proclamation, but they had been fighting for the Union since November 1862.  That fact, coupled with a visit from Robert Smalls to President Lincoln, probably resulted in an earlier reading of the Emancipation Proclamation than Lincoln had originally intended.

That reading, the recognition of the men as soldiers, and the Jubilee that attended those events occurred on the old Smith Plantation, 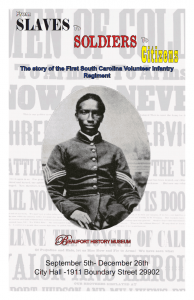 part of which is now Mossy Oaks, where Andy Holloway lived. He wanted to know more about the soldiers who had trained there, and began to research their stories.  Now Andy has just graduated from College of Charleston with a major in history and a minor in archeology.  A talented middle school teacher had changed his life with a story that seemed to touch him personally.  In the meantime, Andy has become an archeologist with work at Jamestown, and plans a career in archeology. His senior thesis at College of Charleston? The story of the 1st SC Volunteer Regiment.

Andy is masterminding the exhibit on the 1st SC that will be on display from September 6th through December 22, 2013, at the Beaufort History Museum., and Beaufort students will again be involved. Beaufort Middle School Arts teacher Stephanie Luzny is directing a group to create an “Emancipation Oak” as part of the exhibit., and members of the Beaufort Junior Symphony will provide music at the opening.

Along with the exhibit, Beaufort History Museum is offering these events in September:

Also during September is the Beaufort Public Library’s “Reading the Civil War” series of  events and Artworks’ presentation of Natalie Daise in “Becoming Harriet Tubman, September 6-8, 2013, plus many other related events in Beaufort County.