Beaufort rallies for it's hometown girl

By Hannah Morris | The energy that flowed through Beaufort on Friday was evident as the flashing lights of Hollywood were buzzing around downtown at a rally for Candice Glover that was filmed by American Idol.  The popular show sent a crew to Beaufort for the next few days to capture as much of Miss Glover’s hometown, and life, as possible.  Plans are to visit Fripp Island, the beach at Fripp, Beaufort High School and the Glover family’s church on St. Helena Island.

And Beaufort is very proud of it’s young songstress.

Eagerly, what must have been well over a thousand fans, including Candice’s family members, schoolchildren, Beaufort’s mayor and city council members all crowded together at Henry C. Chambers Waterfront Park in the 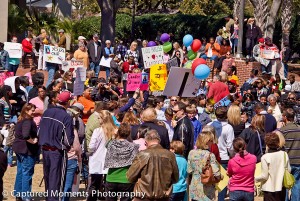 early afternoon, signs lifted, all in support of Candice’s immense talent. There was that energy in the air, and only good vibes being cast towards the powerhouse singer…which will hopefully bring a great deal of joy to her when she sees the endless videos, newscasts, and online photos of her friends, family and fellow Beaufortonians banned together to show their support.

Week after week when Candice takes the stage, she continues to wow judges and American Idol fans across the nation, often times taking many opinion polls as the “standout performance” of the evening. This previous week, judge Nicki Minaj commented on the singer’s talent after her performance of I (Who Have Nothing).

“It would be in everybody’s best interest to never, ever perform that song ever again…You just destroyed and annihilated it.”  The judges aren’t the only ones giving Candice positive feedback. Each night the show has aired,  local blasts across Facebook and Twitter begin to erupt, urging votes for the Lowcountry-local to make it as America’s next Idol. And with her recent voyage into the top 10, it is no secret that Candice has everything it takes to go all the way.

If you haven’t caught an episode of American Idol this season, tune in on Wednesday and Thursday nights at 8pm, and be sure you cast your vote for our very own vocal genius, Miss Candice Glover.

For dozens of photos of the rally at the Park, click here to visit our Photo Gallery.
Thanks to Eric R. Smith for taking the great photos for us. 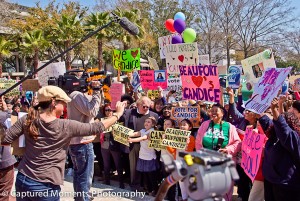 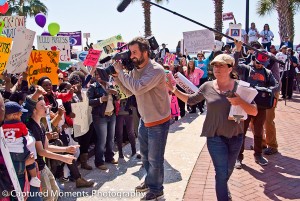