Traveling along Martin Luther King Jr. Blvd. on St. Helena Island, shortly before you reach the’ hanging tree’, off to the left you will find the ruins of an old church; what is known in the area as The Chapel of Ease. A chapel of ease was built to serve the plantation population of the area, being too far away from the parish church in Beaufort, to attend Sunday services. Building of the chapel was commenced in about 1740, using tabby construction materials.

The St. Helena Chapel of Ease was ideally situated for the planters of the island, by 1812, it had been granted the designation of parish church. Then on November 4th, 1861 Sunday services were interrupted by a messenger who brought news of the impending invasion of nearby Beaufort by Union troops to a Captain William Oliver Perry Fripp.

Fripp’s ancestors had been designated to maintain the building and upkeep the chapel, as John Fripp III had left 500 pounds for the purpose in 1780. A year earlier, Edgar Fripp and his wife Eliza had taken their place in a mausoleum built for them in the

adjacent graveyard back in 1852. Built by Charleston stone-cutter W.T. White, it remains on the property today, and still shows to be in good condition. According to a diary written by Thomas B. Chaplin on April 13, 1852, “Said vault was a fine affair and did not have to wait very long for it’s occupants, Edgar & wife. The Yankees broke it open during the war hoping for treasure. It is now somewhat out of order.”

The chapel was destroyed in a horrendous forest fire that happened after the Civil War. Today, the ruins of the chapel and a graveyard remain.

The vault still remains out of order to this very day.

The planters left St. Helena with the arrival of Union forces in 1861, the church never regained its stature. Some stories relate that union soldiers used it for services during the war, as well as northerners (carpetbaggers) who came to the area after the war to educate and train the former slave population.

The door of The Fripp’s vault was ruined by the soldiers, and at some point it was decided to brick up the entrance. According to the story, workmen did a very good job of sealing the vault, only to return the following day to find the bricks removed and neatly stacked beside the mausoleum. This had occurred many times. Convinced that the supernatural was at work, the job remained unfinished. Local authorities had assured that no one had been in the area the previous night long enough to complete such a task. Today the vault remains empty, the door is half-sealed by bricks. One might find the experience of looking into the vacant vault more than a bit unsettling, if not downright eerie.

People have witnessed a number of ghostly occurrences on the grounds. Some folks have reported strange sensations when walking through the church`s graveyard. Visitors have seen apparitions of people dressed in 18th-century clothing. Others have seen the ghost of a lady in white that carries a child through the graveyard. Many also report hearing whispered prayers and singing coming from the interior of the chapel. Still, yet others claim to have heard names being shouted in the silent burial ground, and in the surrounding woods.

With such a mingled heritage and bloodline, coupled with about five centuries of history to feed it, it’s surprising that the ghosts don’t outnumber the living in the thick air of the sea islands….or perhaps they do.

Be sure to check back weekly throughout the month of October for more haunted history and local lore with our Beaufort’s Haunted History Series.

Here’s a video tour of the Chapel of Ease site: 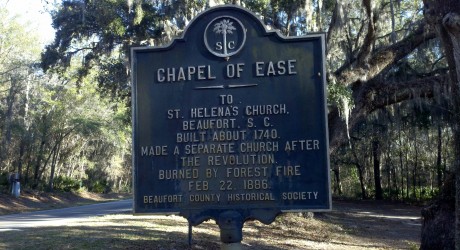 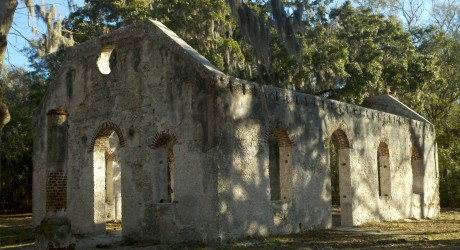