By Cindy Reid | What’s said about firefighters is that they are the ones rushing into the burning building while everyone else is running out. It can be said that Ross Vezin not only runs into burning buildings if need be, he rushes to help wherever he sees a need. Ross has been a City of Beaufort firefighter since 2008, and since then, he has devoted much of his free time to his community, often working with children in need.

Born and raised in Jupiter, Florida, Ross decided to become a firefighter while in high school. As Ross recounts,” I had a role model and mentor in Capt. Jim Dillon of Miramar Fire and Rescue. His son, David, and I were best friends. Tragically Capt. Dillon was killed in the line of duty in 2006 but his life and service inspired me to follow in his footsteps and do what he did for his community.”

Directly after high school, Ross attended Fire Academy in Florida and upon graduation started applying for jobs all over the southeast. He says, “The City of Beaufort contacted me and I came up for a physical agility test and interview process. They called me a couple of weeks later and offered me the job, so I moved here in June 2008.” When asked what appealed to him about Beaufort, Ross was quick  to smile and say, “The people! Being new, there was always somebody there to ask for help, somebody to tell you the best things to see, the best places to eat, how to get around.” Looking around the waterfront park, Ross added, “And the quaintness, having grown up in a city environment I had never lived where there was a real downtown environment.”

It wasn’t long after Ross was settled into his new job before he started looking for ways to give back to his new community. “Camp Can Do” was just the start.

Camp Can Do is located outside Kiawah Island, “The purpose of Camp Can Do is to provide a fun, residential camping experience for children, ages six to seventeen that have been treated for a serious burn injury.” (www.scburnedchildrensfund.org/camp) Ross has 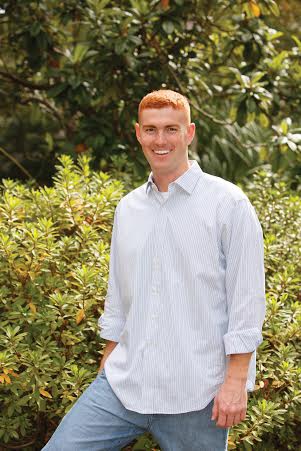 been involved with Camp Can Do as a camp counselor for four years and as a  member of the planning committee for the past two.

Ross says, “We have activities for every age, from trips to the amusement park for the older kids to ice cream socials for the younger children. It is a sleepover camp and we have kids who will need dressings changed, physical therapy and other medical needs and we provide all of that so they can really have a great camp experience.” He says five to six children from Beaufort county regularly attend the camp and “There is no better feeling than to see a kid catch their first fish, it just makes you feel so good!” Judging by the big grin on Ross’s face when he talks about camp, it’s easy to see how much joy he gets from helping the children experience the simple joys of childhood.

Funded by the Burned Childrens Fund and MUSC, Ross is one of ten on the planning committee that helps raise money and get the camp ready (it takes place the end June and beginning of July). “Being on the planning committee helps me get more involved in the camp and learn how it actually runs,” says Ross. The money raised goes towards providing for the children’s needs for everything from activities to sunscreen.

Ross says he was “Just looking for more ways to give back to the community and saw something on the Make a Wish organization and immediately got involved by volunteering my time.” The goal of the organization is clear- “Our mission is to grant the wishes of children with life-threatening medical conditions to enrich the human experience with hope, strength and joy.” (http://sc.wish.org/)

For the last two years, Ross has been one of the three Make a Wish SC Regional Coordinators for the Beaufort/Jasper/Hampton area. “The first line office is in Charleston and we coordinate with the volunteers in our area, and provide training and support.” He says as many as ten children a year from this area are granted wishes from the foundation. “Although the number one wish is a trip to Disneyworld, anything is possible!” he says.

The Muscular Dystrophy Association and firefighters are closely linked. In fact, the International Association of Firefighters is the largest sponsor of the MDA. Most people may not know that the money firefighters are collecting with “the boot” is being donated to the MDA. Affected children are able to attend MDA camps located throughout the country. “MDA camp is a magical place offering a wide range of activities specially designed for youngsters who have neuromuscular disease and the related mobility challenges. At MDA camp, barriers simply don’t exist and a child with a disability can just be a child among friends.” http://mda.org/

Extending his camp expertise, Ross has been volunteering as a camp counselor at the NC MDA camp for the past three years. He says, “I volunteer at the camp in Stokesdale, NC because the MDA camp in SC and Camp Can Do are at the same time. We are there a week, “he says, “kids come from all over to attend the camp.”

When asked what drives him to spend so much of his time volunteering for children’s causes, Ross thinks for a moment and answers, “I have always had a passion for kids, and although we live such busy lives, I try to find ways to make sure kids have the best days, and the best years of their lives.”

Having just completed his Master’s degree, Ross is now attending the South Carolina State Firefighters Association’s Leadership Institute as one of nine candidates selected from the entire state. Being part of that keeps him busy as he says, “We have monthly meetings all over the state, from Charleston to Greenville and discuss topics that include Special Purpose Districts, Labor Relations, General Fire Service History, Firemen’s Insurance and Inspection Fund, Fire Service Legals and Liability and State Response Assets.”

Besides being a full time firefighter, Ross also works as an Emergency Medical Technician for a local medical transport company, which is how he met his fiancée Shannon Harmon. As he tells it, “In January of 2010, I was on a routine call waiting for a patient at a doctor’s office and I was talking to the patients and the staff, and Tammy Harmon said ‘You should meet my daughter sometime.” She showed 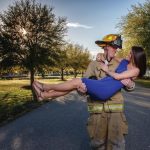 me a picture, and I gave her my number and said if your daughter would like to get together have her call me.” Typical of today’s  courtship, they texted back and forth for a month, and then Ross says, “I said I was going out of town for a birthday party and would like to take to you out to dinner when I get back. The rest is history. I knew she was the one. Shannon has one of the biggest hearts of anyone I have ever met.” Two years ago, the couple bought a house they share with their yellow lab Juno, and their wedding will be in April of 2014. A Beaufort native, Shannon recently earned her Masters Degree as well and is a Sherriff’s technician at the Beaufort County Sheriff’s Office.

Ross’s parents still reside in Jupiter, Florida where his father Tom is a Federal Investigator for the Federal Public Defender’s office, and his mother, Kathy, recently retired as a pharmaceutical rep for Pfizer. His brother Chad lives in Philadelphia, PA where he is the Regional Business Director for Bausch and Lomb. Ross says, “My folks love coming up to Beaufort, they have been here many times.”

Ross says Beaufort reminds him of his Florida roots. “There is always something to do because it is always warm, and Jupiter is on the water so I grew up boating and fishing” he says, “which are things I love doing here in Beaufort. Shannon and I spend a lot of time with family, we do a lot with them. And sometimes we just relax!”

We can’t think of anyone who deserves a relaxing day more than this big hearted, hard working young man. Beaufort is lucky to call him one of our own.

Ross will be working on Christmas, but traditionally the families of the firefighters on duty join them for a holiday meal at the firehouse. So the day is as festive as possible for these hard working first responders. In keeping the giving spirit of the holiday, any donations made to the organizations below would be greatly appreciated.