By Cindy Reid | If you have ever crossed the Broad River Bridge in the spring and wondered why there were suddenly all those boats clustered out there… the only answer is COBIA.
Cobia season is a big deal around here. These large and powerful fish are only seen in area waters from early April to early June as they migrate up the east coast. They range in size from 20 to 40 pounds on average, with the state record held by Robby Maroudas of Hilton Head Island with a 92-pound, 10-ounce cobia caught in 2009. If you don’t tire the fish out it can tear your boat up thrashing around and due to the limited season it is one of the most sought after game fish to catch. It is just a flat out thrilling fish to land.

This past weekend the first local cobia fishing tournament of the season was held by the Fillin’ Station on Lady’s Island. Local 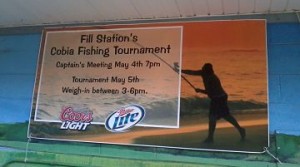 fishing tournaments are a blast, Kip usually enters and even when I am not fishing with him and the crew I tag along to the Captains meetings just to “meet and greet”. The Fillin’ Station meeting was held at 7 PM on Friday night, which coincides with its legendary Steak Night, so the joint was jumping. It was noisy, there was nowhere to sit, and a bunch of friends were there- in other words pretty much just the way you want your Captains meeting to be!  Cold beverages and tall tales abounded.

After paying the entry fee (a modest $50 dollars), we hung out till the official meeting started. We talked to a couple of Marines who had to work that night but planned on fishing when they got off duty at 6 AM. As the meeting went on, and the beverage quotient rose, the crowd got louder and bigger, spilling out over the deck onto the spit of land between the bar and the marsh. After the simple rules and a prayer for safety on the water were shouted out over the din, we wished all good luck and headed home to get ready for the mornings fishing.

Cobia can be found in several local waterways, and also offshore. Unfortunately they weren’t found where my guys were fishing that day. I sat this one out but I am told that a couple of good sized sharks were caught and released. We cooked burgers on the grill for dinner and sat around outside swatting the bugs and enjoying the evening.
Cold beverages and tall tales abounded.

Congratulations to the winners of the tourney!
1st Place – Bubba Bryan and Cara Simpson of Mount Pleasant won with a 65.02-pound fish.
2nd Place –  Mike and Ronnie Edmonds on Team Reel Fix for a 62.2-pound fish,
3rd Place  – Father and son team Tom and Taylor Thomas from Top Gun Charters out of Beaufort finished third at 57.3 pounds.

Check out the picture of the winning fish at www.southcarolinasportsman.com .
It is huge… and that‘s no tall tale!