By Hannah Morris |  Beaufort was given an extra special treat Saturday night, as country music fans came from all over to witness country music star Dierks Bentley live in a concert event dubbed: Throwdown at Fightertown.

MCCS organized and threw the large affair on base at MCAS Beaufort, where many of our local heroes are stationed. Not only is the air station responsible for our daily and nightly Sounds of Freedom, it provides a large amount local jobs in the area, helping our small town thrive.

Tents filled with delicious food, barbeque and beer lined the parameters of the field, where concert goers were able to fill up on everything 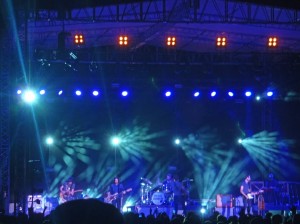 needed for a good time. In addition to the edibles, there were also a number of military vehicles on display, giving fans an opportunity to become more educated on our military operations between the acts occurring on stage.

Concert goers came from all over to partake in the event, many from Savannah and Charleston as well as the smaller cities lining the area; giving our small town a valuable showcase to outsiders. The numbers were unreal in the field. All down for a good time; concert goers ranged from infants to the elderly – and everyone certainly seemed to thoroughly enjoy themselves!

Col. Murtha began the event by thanking all of the parties responsible for the affair, giving a special genuine shout out to our heroes in the Marine Corps stationed overseas. Quoting Dierks, he finished his speech by stating, “This is still the place that we all call home;” a touching end to a heartfelt dedication. 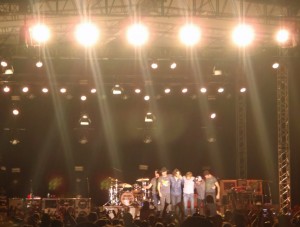 Will Hodge opened for Dierks, bringing the crowd to their feet. His unique voice mixed with his sense of humor made for a perfect beginning act.

Dierks took the stage right around sunset, delighting everyone with all their favorite songs – leaving nothing out. Special lighting and effects made concert goers feel like this event was larger than life; easily comparable to big city efforts. With both his father and grandfather serving in the Army, Dierk’s continuously mentioned the special place in his heart for Service Members and their families; making the crowd feel sincerely blessed. Though the 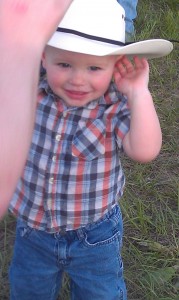 crowd remained large, there wasn’t a bad seat in the house with everyone able to see the stage perfectly.

It’s no secret that event’s like this are somewhat fewer and further in-between here in our small town, but with all the positive feedback, perhaps this is only the start of something greater! 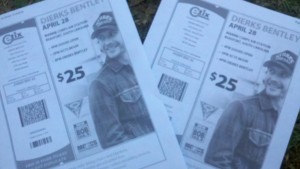