It’s amazing what true inspiration can do for a person.  And from that inspiration, what can be done for people.

Local cancer survivors, and water sports enthusiasts who wish to support them, are forming a Beaufort mixed recreational and racing DragonBoat team offering male and female survivors the opportunity to “hit the restart button” by participating in this fabulous, team-centric wellness program out on the water.

Twenty paddlers sitting side-by-side in a dragon-headed 41 foot long vessel, paddling furiously to the beat of an insistent drummer.
The goal: physical wellness and psychological well-being through this thrilling, team-oriented support program.
Cancer patients that need an offset from the treatments of radiations, medications and operations…needn’t look any further! This is an opportunity to get outdoors in a supportive team environment and regain some of what was lost. All are welcome, whether you’ve been afflicted by cancer, or not.

The DragonBoat Beaufort team is raising funds to purchase their first boat…or likely two boats. They also plan to raise money for local causes benefitting cancer patients.  “We are finding that some people are unable to afford their treatments, and unable to afford the gas to get them to their treatment appointments. We’d like to set up a system in which we issue gas cards to those in need to allow them to get their tanks filled…so to speak”, said one of the groups founders, Amy Kraft.

The first fundraising event will be an encore screening of ‘Awaken the Dragon’, Winner of Best Documentary and Audience Choice Awards at last month’s Beaufort International Film Festival, on Saturday April 21st, at 5:30pm at the USCB Center for the Arts.

aThe movie was also the inspiration behind the Beaufort team forming.

It all started with a post on our Eat Sleep Play Beaufort’ Facebook page that simply asked… ‘What is your favorite film of all time?’
Amy answered with, ‘To kill a mockingbird’ = click!
And the winner is…Amy Kraft!
As Amy says to her Kindergarten class at Riverview Charter School, where she teaches…”WOOT WOOT!”
” I was excited to win 2, all-events passes to the Beaufort International Film Festival from Eat SleepPlay Beaufort. I had no idea what to expect, nor did I realize how it would change my life.”

Sound a tad dramatic? Perhaps. But that is what the experience has done for her.

“There were three films that personally touched me. ‘Happy New Year’ was a film about a U.S. soldier suffering from Post Traumatic Stress Disorder. I had a very difficult year in 2011, I identified with his struggles. The second film was ‘The Real Karate Kids’. This film followed four youths over one year who competed in Karate. One of which had been struggling both at school and at home. The discipline and respect that the sport demands assisted him in getting through the difficulties he was experiencing. I hope to be able to provide a sponsorship for students in the Beaufort area who might be able to benefit from a discipline like karate.”

The film that has had the most impact thus far has been ‘Awaken the Dragon’.
The film follows the Charleston Dragon Boat team over several years. The CDB team is comprised of roughly 50% cancer survivors. Physicians have found that the upper body exercise is beneficial to cancer patients. The paddling mechanics have been proven to be therapeutic. What they didn’t realize, is how mentally therapeutic a ‘team’ sport and atmosphere could be. “These cancer patients and survivors were no longer just survivors…they were winners”, said Amy.

What is a dragon boat?  Amy had no idea prior to the screening of this film.  “It is a long boat with a dragon’s head on the front. There is a drum that follows the pace of the paddlers. There are twenty paddlers, one steering person in the back, and one person in the front of the boat beating the drum”, she said.   “The drum is the heartbeat of the dragon”.

At some point in the middle of the film, Amy leaned over to her husband John and said “I want to play”.
“I was once a runner. A casual runner who enjoyed a group of friends who would get together to run at 5:15am starting at Fordham’s on Bay Street two or more days per week. I ran half marathons…seven to be exact. My first half-marathon was in January of 2008. This came during a period of time when I was assisting a good friend through her treatments for the lung cancer that was destroying her body. Holly Konoza was a super woman, and to see her reduced to nearly nothing before losing her fight, was mind-blowing. I ran that half-marathon in her honor. I yelled out her name over every mile marker. I gave her my medal. She lost her battle less than a month later.”

When Amy got home from the ‘Awaken the Dragon’ screening, she immediately began researching what all was involved in getting a team started here in Beaufort. She was googling and facebooking galore.   Looking into boat costs, insurance, 501c3 status, and everything else involved with getting a non-profit up and running. She touched base with the Charleston team and contacted Sterling Hannah, Director of DragonBoat Charleston, and she informed Amy that there were a couple other people from Beaufort that had the same idea at the same time.
Sterling connected Kyle Faucher and Amy to Clare Taylor and Mary Ann Thomas.
And thus, a team was born. There were seven original founding members for DragonBoat Beaufort, adding Jeff Evans, Kate McClintic and Bernie Moscovitz. And all were meeting as the board of directors for the first time in less than a week from seeing the film.

That, our friends, is dedication, and enthusiasm.

The team has taken off since that first meeting at Port Royal Pasta Company where owners and founders Kyle Faucher and his wife Renee’ graciously hosted everyone.   The team is doing most of their marketing and creation of public awareness through social media. “The affect that Facebook can have is truly unimaginable”, Amy said. “We were blessed with twenty people at our team’s first ‘land practice’ just this past Saturday. Several of those people were Facebook connections or knew someone who’d seen it on Facebook.”

DragonBoat Beaufort is holding another land practice Saturday the 24th at 10am, Waterfront Park, at the flagpole. It’s first “newbie” water practice will be held at Brittlebank Park in Charleston. 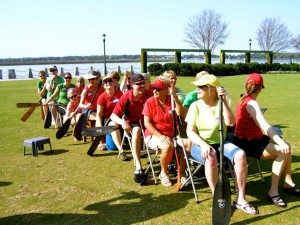 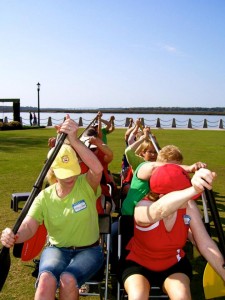 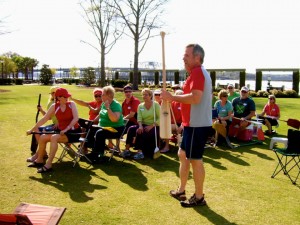 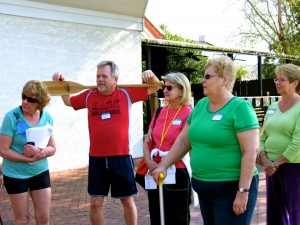