By Hannah Morris | Beaufort became an international stomping – or riding – ground Wednesday night as teams from all over the world rallied together for the Cycling Classic. Riding at speeds that were strong enough to blow your hat clean off your head, and certainly faster than any car is permitted to operate downtown, close to 150 cyclers all came together to spin competitively around 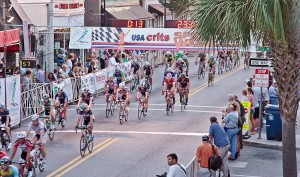 Throngs of onlookers were treated to the special form of cycling known as criterium or “crit” racing; a form of racing typically taking place in city centers – more enclosed and at a quicker pace than long distance races. In order to be successful, 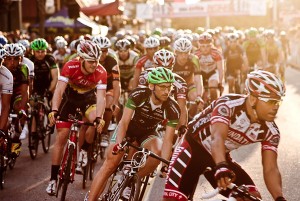 crit riders must have a wide range of technical skills to maneuver quick turns at high speeds while still maintaining the force needed to accelerate ahead of other riders. Criterium racing can be on tracks of varying lengths, with our local Cycling Classic measuring six-tenths of a mile and taking place on Bay, Scott, Craven, and Newcastle streets downtown.

The racing began at 5 p.m. allowing children 12 and under to compete in their own 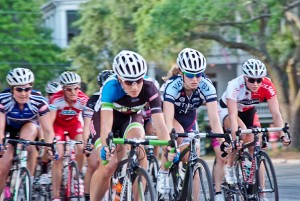 special competition. At 6 p.m. the 50-lap race for the women commenced followed directly after by the men’s 75-lap race at 7:30 p.m. With an onslaught of public onlookers, the races both began and ended at the landmark clock located on Bay Street in Historic Downtown. Spectators were treated to an exciting race with professionals whizzing by at speeds reaching 40mph; definitely high enough speeds to shake things up in our little seaside town!

Beaufort Memorial Hospital sponsored the event for the sixth year in a row as part of a series beginning last Saturday in Athens, GA. This is the third race that will take place over nine days in different cities all over the South East.