So much African American history abounds in the Beaufort area.

Black history is alive and it’s everywhere in Beaufort. Many men and women chose to be brave and selfless while creating this history, not knowing for sure if the risks they were taking really would change the world around them. These locations and their importance speak highly of their character and strength, and as locals,  we are so thankful that we get to share in this rich amazing history.

Since the city’s founding in 1711, generations toiled, raised families, formed their own Gullah cultures, created their own churches and survived the only way they knew how.  It took several generations and a big war to end slavery in America. Here in Beaufort, Black Heritage lives on as a proud, significant reminder of the lasting strength and character of these original African-Americans. Beaufort African-American heritage runs deep.

We hope you’ll spend some time getting to see these spots and to learn about their history and their inspirational stories. 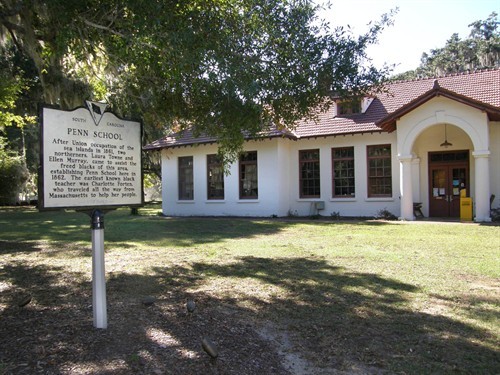 The Penn Center, formerly Penn School, sits on 50 acres of picturesque land with mossy Live Oaks and seemingly ancient buildings. In 1862 Quakers founded it as a school for freed slaves. In 1974 this incredibly significant African American historical institution became a National Historic Landmark District. The Penn Center is considered to have had one of the greatest positive impacts on African American education and the preservation of the history of the Gullah Geechee people. It had a notable impact on the overall lifestyle of formerly enslaved. Not only were the men and women in the area educated and thereby empowered by knowledge but they were also taught a trade, and different ways to make a fair living, own and steward land, etc.

Because of the work done by the founders and participants of The Penn Center, St. Helena, SC still has a rich and deep rooted Gullah cultural influence. It’s a loved and preserved way of life that we are thankful to get to witness. 16 Penn Center Circle St. Helena Island, (843) 838-2432

The York W. Bailey Museum is the first African-American museum in Beaufort County, to interpret the history of Penn Center, as well as that of the Gullah Geechee community in the Sea Islands. The museum features the Education for Freedom exhibit, three galleries, a gift shop and book store featuring traditional and contemporary Gullah arts and crafts.

What is now the site of the York W. Bailey Museum was formerly The Cope Industrial Shop at Penn Center. Built in 1912 is was to house the more industrial classes of the Penn Center’s educational program. These classes included Cobbling, Carpentry, Blacksmiths, and more. It was originally names for Frances Cope, a Quaker from Philadelphia, he was a trustee for the institution for several years. During the Penn Center’s 50th anniversary the Cope Industrial Shop was dedicated. Among the Civil War heroes participating in the event was our own Robert Smalls.

The school was rededicated in 1999 and is now the site of the York W. Bailey Museum, named for the Penn School’s former student who came home to St. Helena after becoming a doctor. If you plan to visit, be sure and check out the permanent fixture “Education for Freedom” Exhibit. 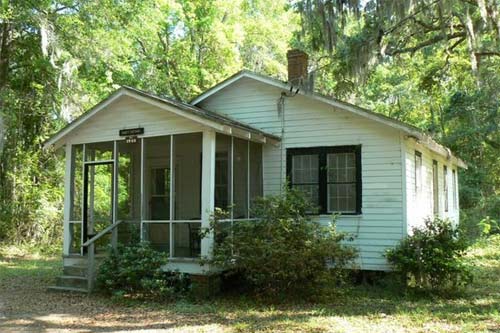 One of the more exciting things about Penn Center’s more modern history is that it’s interwoven with Martin Luther King Jr. From 1963 to 1967 King would stay at the Gantt cottage often. Meeting with the Southern Christian Leadership Conference, they would have meetings late into the evening and the cottage was where Martin Luther King Jr. went for rest, solitude, and to prepare for public appearances.

The Cottage is even said to be the place he began writing his famous “I have a dream” speech. You can tour the very place of where one of our nation’s most revered heroes prepared to make history even bigger than he could have imagined. 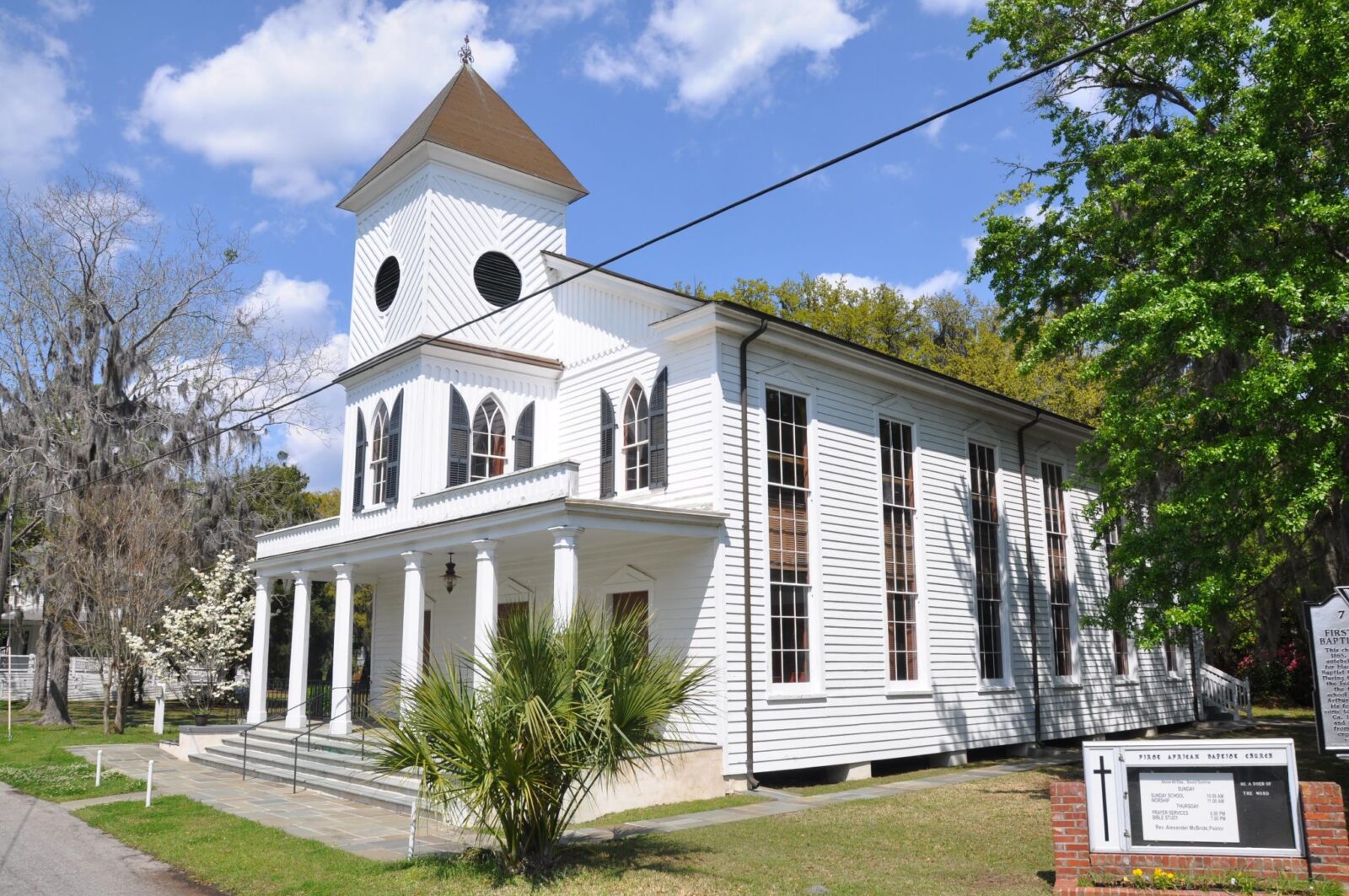 The 1st African Baptist Church was founded in 1865 by Reverend Arthur Waddell, who had relocated from Savannah, Ga. It was built by freed slaves after the Civil War. Amazingly, only 2 years after becoming free and while still working to support their own families these men purchased the land and built the church together. It was home to a school for freedom that educated the newly freed African American population. It was one of the churches that grew from an Antebellum Praise House by the African American members of the Baptist Church of Beaufort.

An Antebellum Praise House often refers to a tent revival during the Antebellum Period which went from 1790 to the 1840’s. At the time popular theology became that an individual had direct access to God and could form their own relationship with Him. They now believed they no longer needed the church to act as a “middle man”. They also began to believe that as humans it was imperative to realize it was your right to exercise free will. There was an explosion of religion, including huge revivals that ultimately turned into permanent churches. This is also when several new denominations got their start, and also when several churches in the Lowcountry were formed. 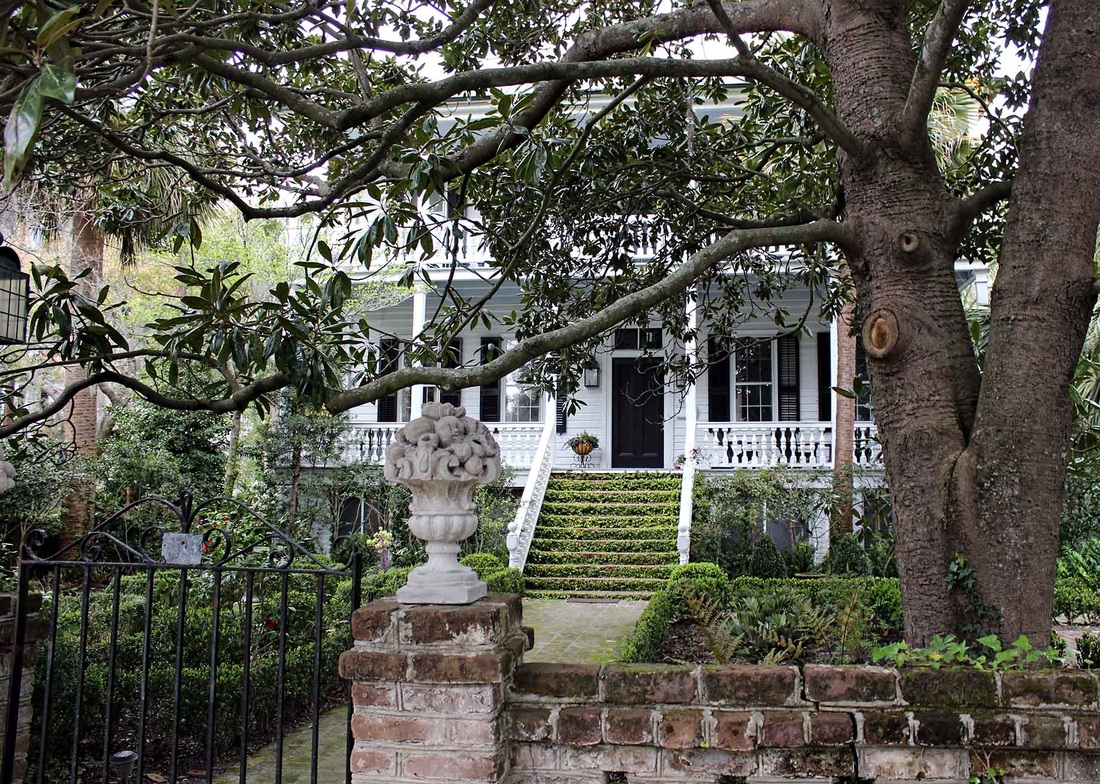 Unarguably one of the greatest heroes to ever call Beaufort home, Robert Smalls was born a slave in 1839. He served under his master John McKee living in what is now known as the Robert Small’s House. This is the site where he spent most of his years as a slave before being placed in Charleston to work and earn money for McKee. He ended up working on the ship CSS Planter, where he learned everything he needed to pilot a ship without the white crew members who controlled it.

On May 13, 1862, Smalls commandeered the ship freeing the crew and their families from slavery. He turned the ship over to Union forces after sailing it through Charleston Harbor… and was thereby freed from slavery. Smalls quickly became well known in the North. Newspapers described his actions, and Congress passed a bill, signed by President Abraham Lincoln, that awarded Smalls and his crewmen the prize money for the Planter. His heroism became a legend and he went on to become a public servant.

Immediately following the war, Smalls returned to his native Beaufort, where he purchased his former master’s house at 511 Prince St. His mother Lydia lived with him for the remainder of her life. He allowed his former master’s wife (Jane Bond McKee, who was elderly) to move back into the home prior to her death.

Smalls served in the SC State Legislature and the U.S. House of Representatives. He also served in S.C. Senate and became a Major General in the state militia. As a politician, Smalls authored state legislation providing for South Carolina to have the first free and compulsory public school system in the United States, and founded the Republican Party of South Carolina. He was the longest-serving African-American member of Congress until Adam Clayton Powell, Jr. in the late 20th Century.

His example and persuasion helped convince President Lincoln to accept African-American soldiers into the U.S. Army. This man’s story is so rich with courage and is a huge part of our local and national history. In 2004, the U.S. named a ship after Smalls, the USAV Major General Robert Smalls, a logistics support vessel operated by the U.S. Army. It is the first Army ship named after an African American. Upon his death in 1915, his funeral was the biggest funeral to ever be held in Beaufort, and has been ever since. He is buried on the grounds of the Tabernacle Baptist Church and his house has been designated a National Historic Landmark. 511 Prince Street, Beaufort 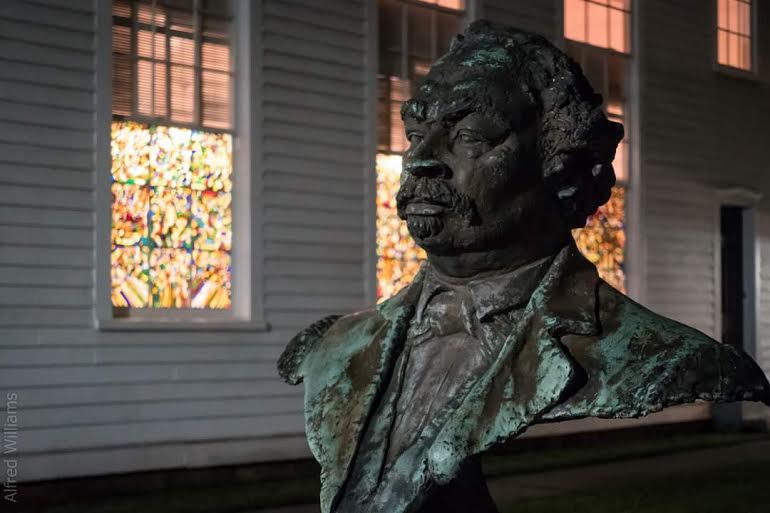 Originally built in 1840, this church was formed by African American members of the Baptist Church of Beaufort in 1861. This is the final resting place of Robert Smalls and his beloved first wife. There you will find a memorial in his honor. 907 Craven Street, downtown Beaufort 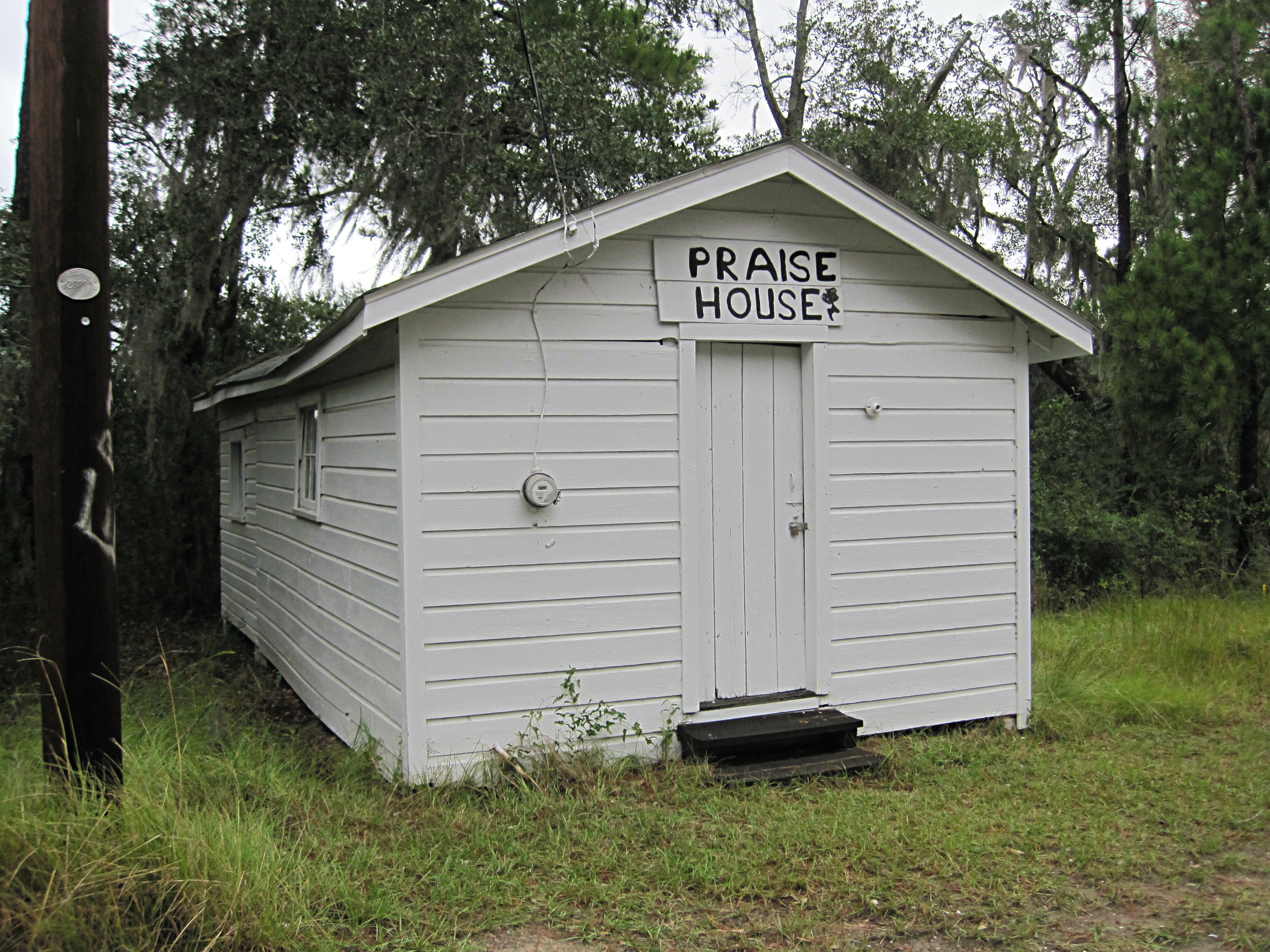 Eddings Point Community Praise House is a historic church located on Saint Helena Island. It was built about 1900, and is a narrow, one-story gable roofed building of frame construction with the entrance in the gable end. Built from wood, no more than 20 feet by 20 feet, the small frame houses are simple structures. The interior consists of wooden benches along the walls and several in the middle with a podium or stands at the front of the room.

Originally built during the pre Civil War era by plantation owners as a place of segregated worship, the praise houses became central points in the community in the ensuing years, as places of worship, but also a meeting places and even as self-governing “courthouses” for the self reliant African American community on St. Helena Island. 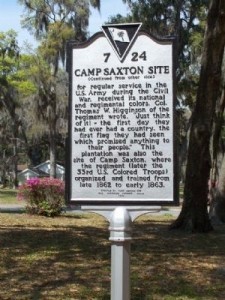 Camp Saxton is home to the 1st South Carolina Volunteers, a Union Army regiment composed of escaped slaves from South Carolina and Florida. The 6-acre property located in Port Royal was listed in the National Register Historic Places in 1995. Situated along the Beaufort River, it is bounded on the east by the river, on the west by the United States Naval Hospital Beaufort complex, on the north by the boat basin off the Beaufort River and on the south by the ruins of the Fort Frederick Heritage Preserve.

The site contains an intact portion of the U.S. Union Army camp occupied from early November 1862 to late January 1863 by the 1st South Carolina Volunteers. The camp was the site of the Emancipation Proclamation ceremonies on January 1, 1863 and is home to the fabled ‘Emancipation Tree’.  A proclamation by Confederate President Jefferson Davis had indicated that members of the regiment would not be treated as prisoners of war if taken in battle. The enlisted men would be auctioned off as slaves and the white officers of the regiment were to be hanged.

Also, Harriet Tubman served with the men at Camp Saxton as a cook, nurse, spy, and scout.  Located on the grounds of the Naval Hospital Beaufort, Port Royal