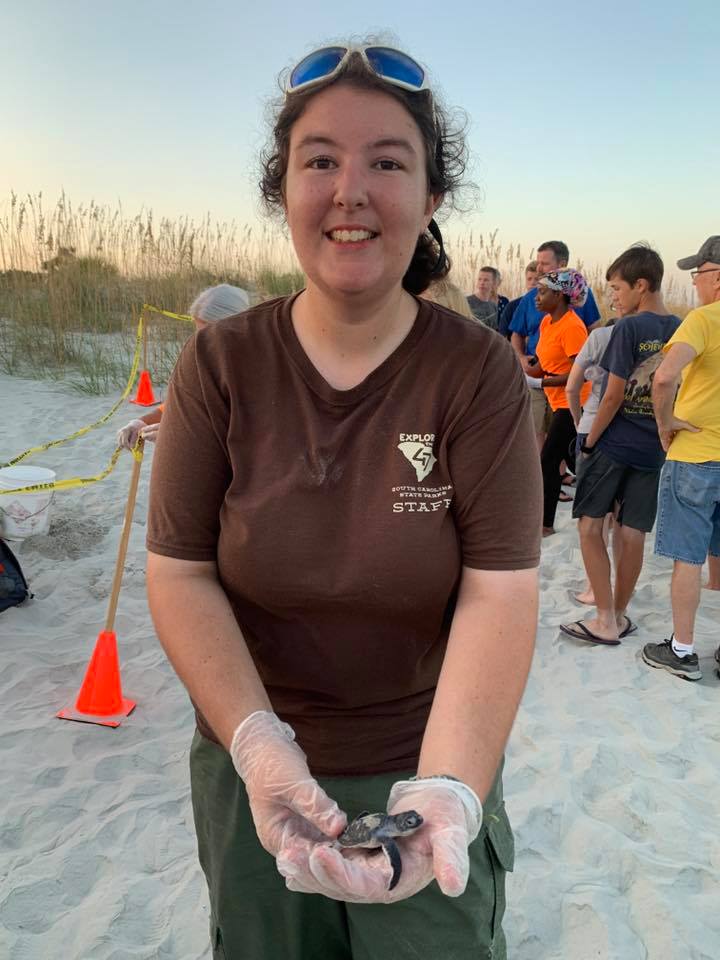 I’m proud to say that I got to be a part of a very special nest inventory tonight! Hunting Island officially had its first green sea turtle nest! The best part? I got to see a green turtle hatchling for the first time, hold one, and release my favorite sea turtle species of all! I’m so glad I was able to be a part of this in my first turtle season here at this wonderful place that I’m lucky to work and live. 💚🐢 – Kaitlyn Rimmer, Program Specialist at Hunting Island State Park.

According to Hunting Island State Park Ranger Carl Berube, this is the first known Green nest on the island since records have been kept. “Greens have white bellies. I’ve only seen one other green. Before Matthew, I was at the end of the pier one day and saw a juvenile Green just hanging out waiting for paparazzi to notice”, said Carl Berube.

Green sea turtles (Chelonia mydas) are the largest hard-shelled sea turtle species. Their common name is derived from the green fat, or calipee, in their body due to their herbivorous diet. They have a serrated jaw for tearing grass, weigh approximately 300 – 350 pounds as adults and average five feet in shell length.

In September 1996, the first documented green turtle nest was laid on South Island in South Carolina. Since 1996, green nesting has become more frequent.

They get their name from the color of their fat, not their shells, which are grayish in older animals. Green turtles are herbivorous and remain near pastures of turtle grasses. Tortuguero, Costa Rica, and south/central Florida are important nesting areas for the green turtle in the western Atlantic. Juveniles are found in South Carolina (ranging in size from 28 to 38 cm (11 to 15 in) in curved carapace length) in shallow creeks, bays, and salt marshes feeding on epiphytic green algae such as sea lettuce. Recent increases in green turtle strandings could be due to an increase in the Florida population.

Nesting by green sea turtles in South Carolina is infrequent to rare.

Be sure to follow them on Facebook to keep up to date with Sea Turtle Conservation in our area.