Game on: A look at southern football

By Cindy Reid |  Are you ready for some football??? Boy we sure are blessed to live in a part of the world that loves college football! Yes a lot of us have our favorite pro teams, especially if we are northern transplants (guilty as charged- Go Jets!), but there is nothing like the intensity and devotion southern fans bring to college football.

The number one rivalry here is USC vs. Clemson. (For our purposes all Carolina fans know  there is only one USC and it isn’t in California). Also known as Gamecocks vs. Tigers. If you are a newcomer and have been puzzled by the big orange and white paw print decals on cars and trucks, that is a Tiger fan. Same for the black and garnet decals and flags, this is our Gamecock pride.

In our area, we also have some homes where it’s “the house divided”, where one spouse went to USC and the other to Clemson, or a 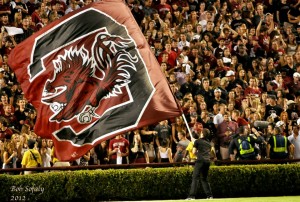 parent who went to one school and a child to another.  I have noticed that some of us root for both teams, as long as they aren’t playing each other, under the general idea of rooting for anything from South Carolina. Palmetto pride should always trump in-state rivalry.

Then there is Georgia. Their big rivalry is University of Georgia vs. Georgia Tech. You gotta love the University of Georgia’s mascot, Uga. Uga is an English bulldog with a pedigree extending back several generations. I suspect Uga’s life is more pampered then most dogs, although they seem to be replaced at an alarming speed due to early demise. Uga also seems supremely oblivious to the

game, but the same can’t be said for the Gamecock’s mascot, Cocky, an actual rooster who attends the USC games.

“Southern Fried Football” by Tony Barnhart goes a long way in explaining the lengthy history of college football below the Mason Dixon line, as does “Where Football is King: A History of the SEC” by Christopher J. Walsh.

Because we live in an area where people hail from all over the country, you can wander into one of the local bars like Fat Patties, or Emily’s on a Saturday and see fans hollering for teams from Oregon to Iowa. It’s all good natured as football fans around here like to hang out together no matter who they are rooting for on any given Saturday. So get on out there and root for your team, either at a sports bar, tail gate party or drag the TV outside and have a throw down at home.  GO ______!  (insert fav here) 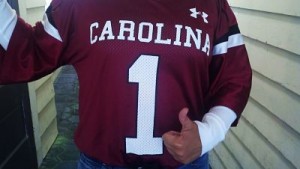