Godspell opens this weekend in Beaufort 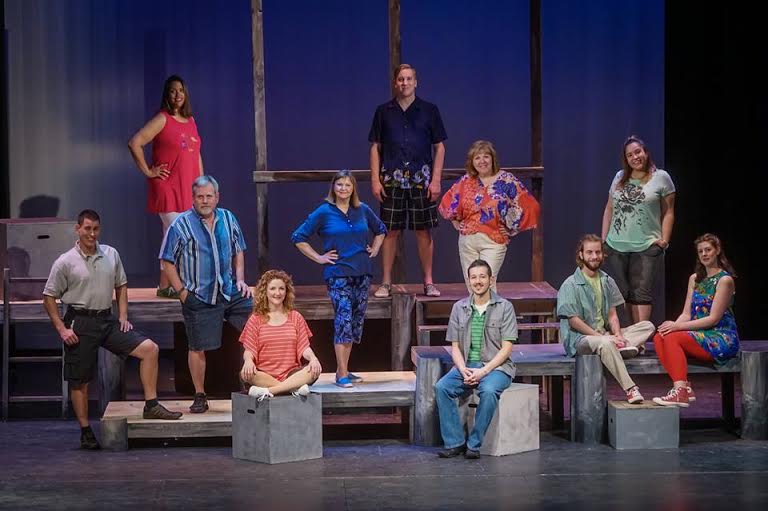 By Libby Ricardo | On Tuesday afternoon, Noah Krepps and I wandered down Carteret Street onto Bay in search of a quick bite and the ever needed tech week fix of caffeine.  Recent circumstances have made it necessary for Noah to step into the lead role for the Beaufort Theatre Company’s production of Godspell, and we had met early to review blocking and lines prior to our official cast rehearsal.  This is Noah’s first production here in Beaufort, having just moved to the area in the last few months.  While chatting about his move and his initial impressions of his new home, it was hard for me not to think back on my own experience moving to the area less than two years ago.

Godspell is a deceptively tricky piece of theater.  The music is complex, and yet, when sung correctly, seems so effortless.  The content is strictly biblical, a contemporary take on the Gospel of Matthew.  There is a mellow haze surrounding our collective cultural recollection of the original production.  So often I hear, “isn’t that the one with the hippies,” or some comment or critique of that ilk.  For me, that particular time in our history is an intangible image, a paradigm that preceded my existence.  As we began to work on this show, I felt overwhelmed by the prospect of grappling with such meaty material through a lens I didn’t understand.  However, my brilliant actor/friend/set designer, Greg Rawls cleared my apprehension with one rendering.  I looked down at the paper with delight and saw the landscape of my beloved Lowcountry: a dock, a shrimp boat, a palmetto tree and a crescent moon.  Suddenly, this story opened up for me, and revealed the nature of the parables it contains.  The cast and I were going to explore the importance of community.

Two years ago, I moved to Beaufort on a Tuesday and began rehearsals for Grease that following Sunday.  I knew not a soul in the area, save my husband.  I walked into the USCB Center for the Arts and found my family.  We shared our Grease with Beaufort, and suddenly my family grew.  Theater became my means of supporting this community and as is so often the case, that support became reciprocal.  Now, songs like Day by Day, Light of the World, and By My Side take on new meaning, not simply relating to the parables and the Disciples, but about our own trials and triumphs as a community.  Our shared experience was fodder for the actors. 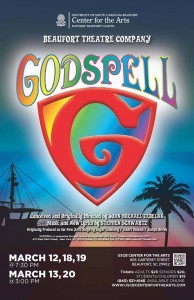 Our cast represents the diversity of our wonderful little home.  Velma Polk and Elaine Lake are Beaufort staples, two-thirds of the ever popular Sweetgrass Angels.  Daniel Bittick and Angela Chancay are two fantastic young performers and proud products of the Beaufort School system.  Susan Smith is one half of Captured Moments, a photography business co-owned with her talented husband, Eric.  Many of you may remember Susan’s talents from 8-Track, produced by BTC a few years ago.  Steyn Maree finds himself in Beaufort via military service and joins us to lend his talents to the production in a remarkable turn as Judas.  Kelly Hall and Elizabeth Hargrove both spend their days educating the youth of Beaufort, before dedicating copious hours in preparation for their roles.  Greg Rawls, who wears too many hats in this community to mention them all, serves not only as a member of our ensemble but as our Scenic Designer.

And then there’s Noah Krepps and myself: two outsiders lucky enough to have found our way down to Lowcountry and the Beaufort Theatre Company.  We are fortunate to have the opportunity to work with such incredible talent in such a beautiful venue patronized by such a supportive audience.

Godspell, presented by the Beaufort Theatre Company, opens this Saturday, March 12 and runs for two weekends.  For tickets and more information, visit USCBcenterforthearts.com.