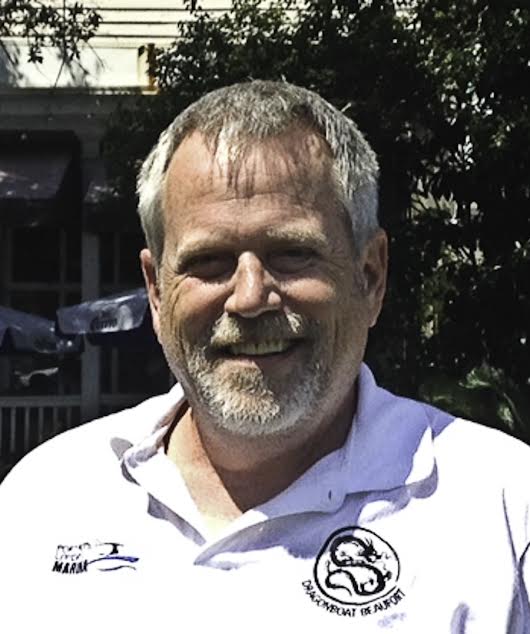 By Molly Ingram | Greg Rawls, President of DragonBoat Beaufort is indeed the Top Dragon.  His persona is gentle, self-described as “kind of nerdy” but when it comes to having an exciting, fun-filled, and successful dragonboat festival, he puts on his “let’s get it done and done right” approach to DragonBoat Beaufort.

Greg graduated from USC in Columbia and spent a lifetime working as a health and safety professional at chemical or aluminum companies in Charleston.  Deciding to take early retirement, he headed down to Beaufort for a change of scenery and to let his creative side come to the forefront.  When not being Top Dragon, Greg sells his beautiful glass creations at the Thibaut Gallery on Bay Street.  Or, you will find him at the Center for the Arts at USCB where he is the set designer and builder for their productions.  He is also on the board of the Beaufort Arts Council.

While in Charleston, Greg had captained a DragonBoat and fell in love with the dual missions of the parent organization.  When DragonBoat Beaufort launched four years ago, they adopted the same integral objectives.

First, DragonBoat Beaufort provides cancer survivors the opportunity to heal and regain physical and psychological strength and wellness through the camaraderie and competitive paddling and racing that DragonBoats offer.

What does that really mean?  What it means is that local doctors, nurses, social workers and other concerned advocates will recommend someone to DragonBoat Beaufort who, for example, might require gas money to make it to their treatments or someone who is in the middle of Chemo treatments who had the electricity turned off because of over-due bills.

DragonBoat Beaufort can make an immediate impact on someone’s recovery in a matter of hours, not days or weeks.  This is a big difference between this non-profit and others.  DragonBoat Beaufort manages to cut through the red-tape of many other agencies and get the help needed before others can react.  Greg tells a story of getting a call from a nurse who said a patient was required by his physician to be on oxygen but that he couldn’t afford to get it.  DragonBoat Beaufort had the equipment delivered shortly after the gentleman returned to his home the same day.  Now that is pretty impressive.

The money to fund these all this comes from their one big annual event – the DragonBoat Races.  For the first three years of being in Beaufort, the races were held as part of the Water Festival.  But this year the powers-that-be decided to hold it over Labor Day Weekend.  The DragonBoat Festival will run over two days starting with a free concert/party/dance which will be held at the Henry C. Chambers Waterfront Park on Friday, September 2nd starting at 7 pm.  Bring your chairs, picnic dinner, and enjoy the sounds of the Cluster Shucks and the Sweetgrass Angels as you get ready for the big race day on Saturday.  There is no charge for this fun night on the waterfront.

On Saturday morning, more than 26 DragonBoat teams will compete for gold, silver and bronze medals and a lot of bragging rights.  Each boat of 20 paddlers, a steerer and a drum beater to set their pace also compete for other prizes like the drummer with the best costume or best team shirts. Each boat races twice in time-qualifying heats before the final races begin.  Four boats race at a time and the course runs along the river right next to the waterfront park.  This is where spectators provide constant cheering, laughter and they watch these teams paddle hard to raise money for this great organization.

The final races begin around 1:30 pm after a short ceremony where everyone can take a minute to remember those cancer patients who lost the fight, are fighting the fight, or won the fight against cancer.  I suspect we all have more than one friend or family member who fits into one of those categories. 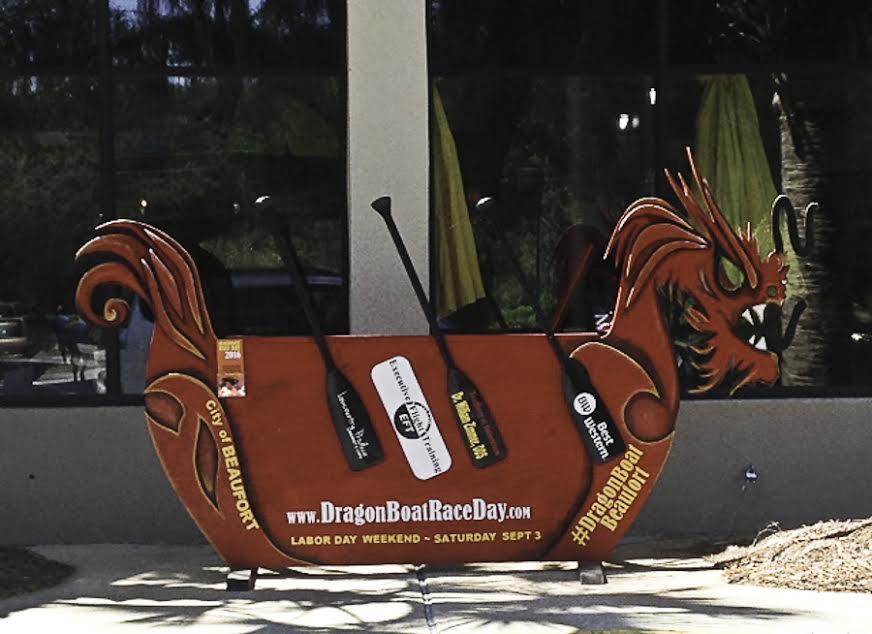 Stuck on what kind of photo you would like to send for this year’s holiday card?  Consider a group shot of the visiting dragon out front of Grayco’s over on Lady’s Island.  Made by Greg, this young dragon (he is less than 42 ft.) can provide a great prop for a family photo as well as extend awareness for this great organization.

Or better yet, put together your own team and join in all the fun.  This is a great event to participate in or simply watch from the waterfront park.  Get out those dancin’ shoes on Friday night and show up on Saturday morning to supporting your favorite teams.  These 22 member boats will be “all in” to get a medal at the end of the day.  I promise they will go faster if you cheer them on from the park.

Find out more about DragonBoat Beaufort at http://www.dragonboatbeaufort.org.