Hemingway’s Bistro in downtown Beaufort is organizing and hosting a Band Jam & BBQ fundraiser for the Spanish Moss Trail on April 6th from 3 to 7pm and they’re putting on quite a show with live, home-grown bands including The Bull Grapes, Fripp N Friends, The Sometimes Later Band and The Rose Family Band.

They’ll be serving up mouth-watering BBQ for a mere $10 a plate and thirst-quenching $2 beers…and all that great local music. 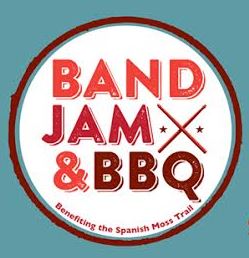 “These bands have generously offered to perform as a gift to our community and to support the important efforts of the Friends of the Spanish Moss Trail,” said Event Creator Charlie Williams. “These bands individually have their own special sound and style, perfect for a casual outdoor event with a mix of country, folk, southern rock, blues and blue grass.”

Williams’ year-long vision for a music-filled, outdoor event in support of the Spanish Moss Trail became a reality after partnering with the Event’s Director and Hemingway’s Bistro Day Manager, Zoe Perpall. Perpall has brought together dozens of community-minded businesses and individuals to collaborate in support of this public event.

Williams said he first heard of the concept of ‘rails-to-trail’ more than 30 years ago. A few years later, he used such a trail on Cape Cod.

“When I heard our own community would have a paved Trail to enjoy, I knew I was going to commit my support – thus the Band Jam and BBQ,” said Williams.

Oh yeah, and there’s a live auction too.  We hope they get one of those fast-talking auctioneers, like that Dan Dotson guy from Storage Wars on television.  That’s some fun.

In addition to music and food, come ready to bid on items ranging from outdoor recreational activities to overnight stays at local accommodations. These items will be auctioned off throughout the event – all proceeds benefiting the Friends of the Spanish Moss Trail – the paved rails-to-trail greenway project located in the heart of Northern Beaufort County.

The Spanish Moss Trail has a 10-Phase Master Plan, which when complete, will be a 14-mile long, 12-foot wide, paved trail – dedicated to pedestrians and bicyclists. The first two phases (3.3 miles) are complete and open for public use connecting the heart of Beaufort to the Town of Port Royal (with parking at Depot Road, Broome Lane and Westvine Drive). Two more phases are underway with construction starting this spring – connecting 7 scenic miles between the Town of Port Royal and the Marine Corps Air Station.  Learn more about the Spanish Moss Trail here, and visit our Spanish Moss Trail page here at eatstayplaybeaufort.com. 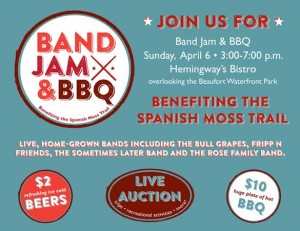