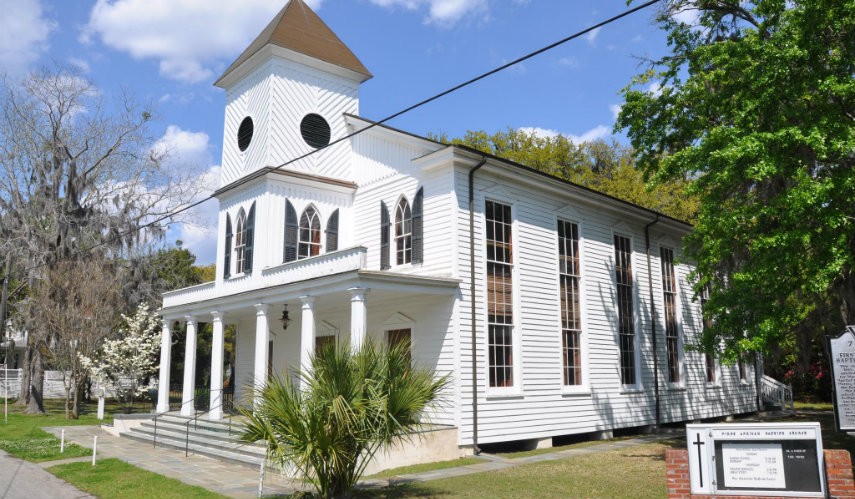 Built in 1865 by freed slaves, the First African Baptist Church of Beaufort has been the spiritual focal point of its community for over 150 years.

A local white Baptist congregation built an earlier church on the property that was used as a praise house for slaves. After the Emancipation Proclamation in 1863 and the end of the Civil War two years later, those former slaves bought the land and built a new church that stands today, mostly in its original form.

A marble plaque on the church recounts its opening history: “Presented as a token of respect by A.D. Deas to the first and present pastor, Reverend A. Waddell, of the First Baptist Church, a native of Savannah, Georgia, who became pastor of said church First of January, 1865.”

Among the church’s earliest members was Robert Smalls, an African-American hero of the Civil War and a US congressman during Reconstruction. A monument to Smalls is on the church grounds.

Most of the church that remains today is part of the original building, though it has been updated with a few modern conveniences, such as electricity, heating and air conditioning.

The two-story white wood-frame building is in the Gothic Revival style and is included in the Beaufort Historic District on the National Register of Historic Places, receiving its designation in 2010.

Church historian John Owens said the building is the oldest one in Beaufort built by former slaves.

“Former slaves who came out from under oppression came together and purchased this property,” Owens said in a 2015 newspaper interview. “Think of the task it took to build this church while still trying to earn a living when you were a slave just two years ago.”

The church maintains its own archive in the former parsonage with artifacts, documents and books from the church’s earliest days, including the Bible used by Waddell, the first pastor, and an old traveling Communion set.