By Cindy Reid | There is authentic and then there is lowcountry, rolled in the pluff mud and baptized in the salt water marsh authentic. You either are or you ain’t and the Bull Grapes have the bona fides or as Kirk Dempsey says, “We are Salt Water Soul.” A local trio consisting of Kirk Dempsey, Adam Granade and Tim Devine, the Bull Grapes play a wild and woolly mix of “gut bucket blues,” country songs, and foot stompin’ songs from who knows where. Front man Kirk Dempsey keeps the ball rolling, handling the vocals, harmonica and guitar (including cigar box) while Adam Granade keeps the beat on the upright bass with Tim Devine on guitar.

Kirk Dempsey is “Proud to say I am from Frogmore, South Carolina.” He and his wife Elaine, and daughters Madison, Caroline and Sarah live in his grandparent’s former house on the farm that has been in his family for three generations. He says, “I grew up on the side of the road selling tomatoes. I was the youngest of four. My brother and sisters were always bringing home new records (Sonny and Cher, The Partridge Family), but one day my brother brought home Led Zeppelin 4. That really stuck. I used to listen to “Misty Mountain Hop” and “The Levee” song to get pumped up for the drudgeries of Sunday school.”

He says, “From that day forward, I went backwards, and every artist that Led Zeppelin would name as an early influence I would listen to. Throw in a couple of Buck Owens eight tracks. And there you have it. “

Adam Granade was born in Milledgeville, Georgia and was living in Vermont until moving to Coosaw Island three years ago with girlfriend Taylor Webster. Adam plays the upright bass in the band, but is a consummate musician who also plays the banjo, guitar, cello, piano, drums and most recently has been playing and rebuilding fiddles.

Adam says the upright bass, (aka his “Bawss Bass”) is “the one that is the most fun, I can ride the bass and keep the sound going.” On being a Bull Grape he says, “Kirk is just fun, he lets me be me. I think I am able to help people relax and play better. I don’t think I am a front man, my goal is to make it easy, and I want to be the guy that allows you to shine.”

He thinks the Bull Grapes music resonates with audiences because “People enjoy hearing something fresh”.

Tim Devine grew up in Kansas City, Missouri. After working and playing music in Chicago for years, he moved to Beaufort about 4 years ago. A graphic designer, Tim lives on St. Helena Island. He says, “I play guitar. Acoustic, electric, baritone, bass, zither and a few other guitar-like contraptions that I built, and slide whistle. I think most of which I have played with this band.”

He says, “I love Beaufort and I really like the way live music is appreciated and scheduled around here. We get to play at some of the most beautiful settings, and we’re usually wrapping it up around 10 or 11. In other bands and places I’ve played, we usually wouldn’t get started until 11 or later and it would usually be in a dank old bar. Next week we have a gig at 9 am, that’s a first for me.”

Adam says, “ Last August Kirk called me and asked me to play with him at the Sand Dollar, and after that we started hanging out and playing music at his house on Frogmore. We were walking in the back, through the fields and vineyard and Kirk grabbed a bunch of grapes off the vine and said ‘Bull Grapes!’ That was it, that was our name. Around December we added Tim as a permanent fixture in the band, and Greg Brooks sits in a drummer when he is in town.”

Kirk says, “We were playing at Nippy’s in Beaufort at the time, I just can’t say enough about how Nippy’s supports local musicians, we 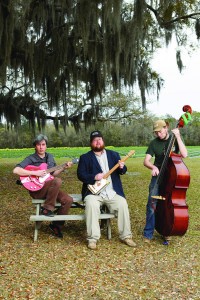 always have the best time playing there for the people.”

Tim remembers, “I met Kirk at a campfire, maybe it was Fourth of July, and he got out his harmonica and started playing. I wanted to get to know this guy! At the time, he was playing at Nippy’s so I started sitting in. We have a blast playing, I look forward to playing with these guys.”

As Kirk says, “I am a very basic musician, I get by with six chords and I don’t even play half of them right, oh well. A buddy of mine, Brian Bowen said, “Surround yourself with people that know what they are doing” just before he fired me as his bass player. So, I bring that with what I brought, and Adam and Tim (along with Greg Brooks) bring the rest. They are very good musicians, so much, that they know where I am going before I get there.”

Tim adds, “We just kind of fell together because we had the same appreciation for the songs we play, it’s not rocket science, it’s just the good ol’ good ones, with maybe a little bit of The Cramps and Tom Waits thrown in.”

What the Bull Grapes bring to the party, or campfire, or oyster roast, is their version of many classic blues songs, what could rightly be called the soundtrack to ‘old weird America” (a term borrowed from Greil Marcus).

At a recent get together/rehearsal/photo shoot under a towering live oak tree at the farm, Kirk was strumming his cigar box guitar and singing softly, “In the pines, in the pines, where the sun never shines”… and then Tim and Adam picked up the melody and the trio spontaneously played this old folk song, which dates back to the 1870’s, making a musical connection that wavered across the salt marsh to Southern Appalachia where the song was born.

They do this a lot, playing an old song you barely remember, but is wedged into your subconscious. When they get to singing and grooving, the song feels like your own soundtrack, the one you kind of forgot about until you heard Kirk https://www.eatstayplaybeaufort.com/wp-admin/post-new.phppound out “Baby Please Don’t Go” and then it all comes back to you. He throws a little Jim Morrison “Doors” in the middle of it and you climb aboard and don’t get off till the last chord is struck. Same with “Black Maddie” or “Killing Floor.”

Maybe we haven’t literally been down on the killin’ floor but when the Bull Grapes play it we can sure remember feeling like we should’a went on at one point, before it was too late, and that’s what the blues can do , bring up that sad, nasty but ultimately satisfyingly  universal feeling.

“Boom Boom,” a John Lee Hooker blues song, is a crowd favorite, a stomper that really only reaches its full power when Kirk gets into the “haw haw haw, hmmm, hmmm” part. It takes a big man to make a big noise and, as it has been pointed out, he has the bona fides.

The Bull Grapes can switch it around, going from a delta blues number to a way back country classic. They cover Merle Haggard’s “Tonight the Bottle Let Me Down,” which is essentially a blues song via country’s famed Bakersfield Sound.

Probably the song that chews it all up and spits it back out is Willie Dixon’s “Hootchie Cootchie Man”.

The essence of the lowcountry boil of salt water, Hoodoo, and cigar box guitar playin’ is all right there and the Bull Grapes make it all alright. So go get yourself a tall sweet tea or cold frosty beverage and catch the Bull Grapes at one of their gigs, either here in Beaufort or up at the beautiful Irvin~House Vineyards on Wadmalaw Island outside of Charleston. I guarantee you will have a stompin’ good time.

ESPB Note:  You can check out The Bull Grapes Friday evening 8/19/13 at Lowcountry Produce Market & Cafe in downtown Beaufort.