One of the most recognizable and most beloved landmarks in the Beaufort area is the historic Hunting Island Lighthouse.

People come from far and wide to see it.  Locals cherish it. It’s one of the few lighthouses in the U.S. that a visitor can climb to the top and take in the same scene that generations before them have witnessed in wonder back in the era when lighthouses were operational and dotted the coastlines.

From the observation deck, legend has it that “you can see the ends of the Earth.”

Deactivated in June of 1933 and later named to the National Register of Historic Places in 1970, the Hunting Island Lighthouse has a unique history.

The purpose of the lighthouse was to warn ships to stay far away, as there are many hazards such as sandbars, wrecks, surf and treacherous currents off of Hunting Island Beach. Construction started in 1859, but was set back as the tower was destroyed during the Civil War in 1862 by Confederate forces so the Union Navy would not be able to use it for navigation.

Major George H. Elliot is credited with the 1860s development of what is known as the “segmented cast-iron” lighthouse design. The Hunting Island Lighthouse was designed in this fashion in order to be disassembled and moved if required. It consists of cast-iron sections, each weighing up to 1200 pounds which are bolted together to form the shell. It’s shell is lined with brick, which constitutes the main load-bearing structural element. 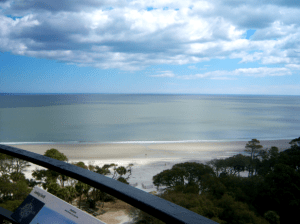 Some say “you can see the ends of the Earth,” from the observation deck at the Hunting Island Lighthouse.

Erection commenced in 1873, and was completed in 1875. With its 167 steps that lead to an impressive observation deck, the Hunting Island Lighthouse has a beautifully built wrought iron staircase, railings and support beams.

The Lighthouse was first located on the northern part of Hunting Island, but severe beach erosion threatened it and its structures. By 1888 it was reported that the Atlantic Ocean’s high tide had reached within 35 feet of the keeper’s house.  As a result, the Lighthouse, the keeper’s home and two other structures were relocated a mile away in 1889 to their present location.

A true treasure for Beaufort to share with the rest of the world, make it a point to visit the Hunting Island Lighthouse…from atop, you can see the ends of the Earth. 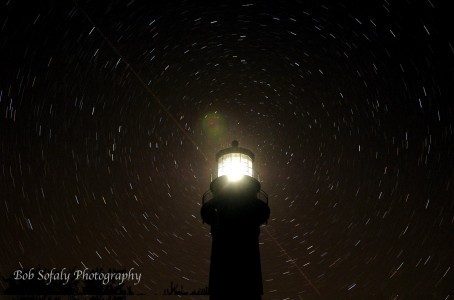 Photo of Hunting Island Lighthouse lit up at night. 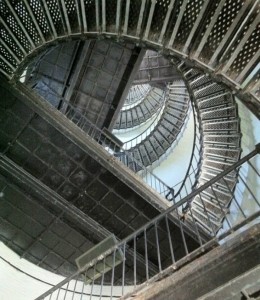