By Susan Clark |  Cowboy hats and boots were plentiful at the Concert in the Park last night as country fans gathered en mass to listen to what James Otto brought to Beaufort. Otto penned the song “Just Got Started Loving You” which was the No. 1 country single of 2008 on Billboard.  Other popular songs by Otto include “Are Ya With Me”,“Shake What God Gave Ya” and “Soldiers & Jesus”.  Opening for Otto was Savannah native Chuck Courtenay.  Courtenay is no stranger to Water Festival, having opened for Concert in the Park’s act Jake Owen in 2010.

With a day full of events behind everyone including, the Raft Races, Badminton & Bocce Tournaments, some toadfisiing, a ski show and more, the night started slowly, but as the sun set and time went on the numbers grew.  The low chatter then turned into a loud rumble and the crowd’s energy rose.

Country fan Amber Shannon came out to the concert with dancing on her mind. “I enjoy country music in the live atmosphere.  I’m going to be dancing all night,” Shannon said. 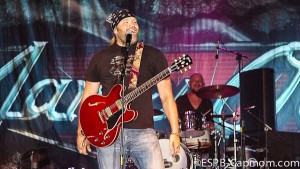 For Katie Knight, coming out for concert in the park has become a tradition. “This is the fifth year now; my aunt and I come out for the country music,” Knight said.

Whether its a last minute decision or a tradition, concert in the park is a guaranteed great time.

Here’s some video of the Raft Races and of course, James Otto…