Arlene Heape Hull, a native of Beaufort will have a ‘by invitation only’ book release and book signing reception on Friday evening, 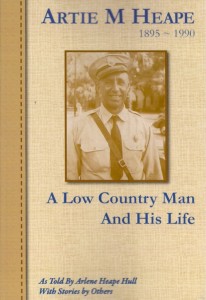 The book, a biography of her grandfather, tells the life story of this Lowcountry Man who served in the Beaufort Volunteer Naval Militia, World War I, the Siberian Expedition, World War II, the Korean War and as the Chief of Police of Beaufort.
Artie Mitchell Heape was born on Saturday, November 9, 1895 in Early Branch, South Carolina in a house built by his father.
In his lifespan of 95 years, he would serve his country on foreign shores. He would serve his state, and the city he called home. In his lifetime, he would marry the woman he fell in love with at first sight at a taffy pull, have three children, be grandfather to seven, great-grandfather and even great-great-grandfather. He was Uncle Artie to countless nieces and nephews. And in the end, his body would be laid to rest in his family cemetery only a few miles from the house in which he was born.

Join Arlene in celebrating her new publication on April 7th.