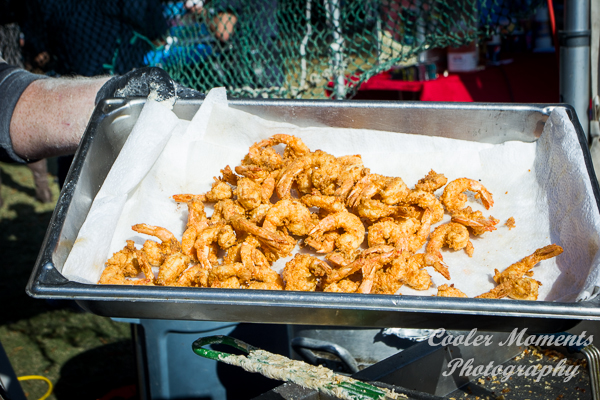 By Harlene Deane | Due to inclement weather this past October, the second day of The Shrimp Festival was canceled. Organizers of festivities planned for Beaufort’s Holiday Weekend added the second day on Saturday, December 5th. If the turnout was any indication, it was a successful event. Unfortunately, not all the original restaurants were able to participate in The Holiday Shrimp Festival. However, Sea Eagle Market, Q on Bay, Plum’s, Papaya Pie and Sushi, Southern Graces and The Island Fudge Shoppe made for a fun afternoon filled with tasty delights.

Each offering on the vendors menu was between 3 and 6 tickets at $1.00 each. Tickets could be purchased from a booth or from a volunteer roaming the event.

First stop..Sea Eagle Market. The shrimp basket was filled with deep fried shrimp crunchy on the outside and perfectly cooked on the inside. The shrimp fritters were incredible…little deep fried nuggets filled with deliciously seasoned minced shrimp. The shrimp sauce for dipping complimented these wonderful fritters perfectly. Going back for seconds later we were so disappointed they were SOLD OUT!! 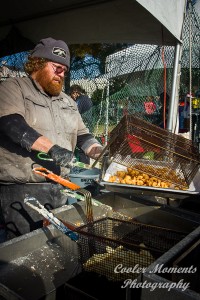 Then it was on to Papaya Thai and Sushi for their coconut shrimp. A great combination of sweet and tangy. The coconut was crispy and the accompanying sauce was well seasoned. Perfect! Since there were two shrimp in each cup, we went for seconds.

After trying the shrimp burger sliders at several other booths, we were disappointed in the mushy texture and lack of flavor.

The Island Fudge Shoppe was a huge hit. While munching away on our coconut shrimp a woman next to us was showing off a ginormous slab of chocolate fudge. When I remarked at how good it looked she gave me a bite! So, needless to say after stuffing ourselves with various shrimp morsels we headed over to The Island Fudge Shoppe booth for our treat. For just four tickets we devoured the incredible fudge. Next time you head over to Hilton Head check their place out!

After reviewing all our tastings we decided to give our first place award to Sea Eagle Market!!

Can’t wait for the next Shrimp Festival…see y’all there! 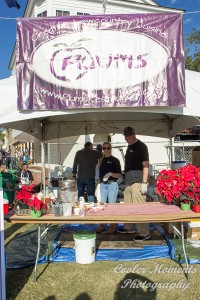 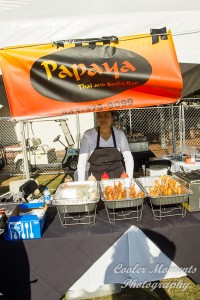