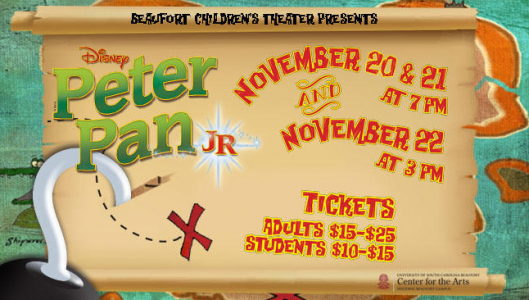 We’re in for a doozy of a performance right before Thanksgiving with the Beaufort Children’s Theatre’s upcoming performance of Peter Pan, Jr. at USCB Center for the Arts in downtown.

It’s been over 100 years since playwright J.M. Barrie introduced to the world a character that has been re-imagined and featured in books, films, and Broadway musicals for every generation over the entire last century. A playful character that seems to bring out childlike dreams for those reading his stories, watching his iconic entrances into the Darling family nursery and flying high above his beloved home of Neverland, Peter Pan and the lost boys that love him, the pirates who seek to capture him and the other inhabitants of Neverland who know him, comprise a complex society that can pull us out of our own reality to discover another world entirely.

For this stage event, Beaufort’s youngest performers will take their turn bringing this iconic story to life.

The Beaufort Children’s Theatre is a staple for young performers in the area, providing multiple opportunities each year for performers to work with arts professionals to sharpen their skill set on stage and they’re bringing the story of Peter Pan to life in a big way.

The cast boasts nearly 90 performers all sharing the stage together to bring Beaufort audiences the opportunity to fly over Skull Rock, to meet the legendary Captain Hook, beautiful Tiger Lily and the terrifying Pirates, playful Lost Boys, powerful Indians, and the beautiful Fairies & Mermaids that call Neverland home. These 90 students represent multiple local schools, church congregations, and families throughout the area. Students of the Beaufort High Drama Program, athletes from Bluffton High School, young students from Holy Trinity, Beaufort Academy, Bridges Prep, Beaufort Elementary, Beaufort Middle, and the countless other academic programs throughout the county are represented in this cast. This diverse group of ages and backgrounds has kept the halls of the USCB Center for the Arts busy this fall as they enthusiastically joined together to create a strong ensemble.

The cast of Peter Pan, under the direction of Anna Powell Schaffer, has spent weeks of rehearsals connecting to the strong characters of Barrie’s imagination and learning the iconic songs of the Disney interpretation of Peter Pan through the animated film of 1953, under music director, Anna Wheeler, a veteran to the Beaufort Children’s Theatre.

In addition to music rehearsals, the cast has tackled challenging choreography to create the magic required of performers to bring audiences along for the ride to Neverland, under Gina Taramasso.

Beyond the arts training, the Beaufort Children’s Theatre aims to instill the value of ensemble work, sharpen communication skills and help performers learn to apply the lessons taught on stage to their broader experiences to create well rounded and confident members of our community.

“This piece has no specific target market,” notes Schaffer, “It speaks to all generations, it teaches us things, no matter what stage of life we are passing through, and it is heart-warming to sit through and experience the magnitude of these performers, working together, promoting each other and experiencing the magic of live theatre.”

School Performances are scheduled for November 19th at 9:30 am and 12:30 pm. The general public is invitedfor Friday and Saturday evening performances, November 20th & 21st at 7 pm, and a Sunday Matinee November 22nd at 3 pm.