By Allegra Craig | Main Street Beaufort (MSB) Dollars are coming back after a year-and-a-half reprieve. This promotion – generously provided through Main Street Beaufort, USA – offers customers the opportunity to shop for half-price over a four-week period, between the on-sale date of February 21, 2015 and Saturday, March 21, 2015.

At the inaugural sale of MSB Dollars in February 2012, they sold out in 18 minutes. Planning and knowledge of the details and restrictions are imperative for those planning to 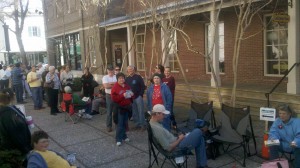 As of Tuesday, February 17th, approximately 46 businesses have signed up (visit MSB’s website for the latest list), including nine restaurants.

Businesses are eager to participate. Lulu Burgess owner, Nan Sutton, comments that, “The Beaufort locals that participate seem to love it. And it does bring in business during an otherwise slow time.” Cindy Turnbull, owner of Grace & Glory Uptown, adds, “Not only did it boost sales, the customers had a lot of fun!” And while Beaufort Clothing Company did not participate in 2012, they received customer requests for them to participate this time.

We had a lot of success with Main Street dollars in 2012, we also benefited from being right across the walk way from Main Street while people were lining up to purchase their dollars”, 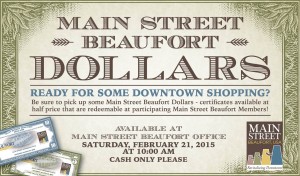 said Kelly Smith, General Manager of Common Ground Coffeehouse.  “We are very much looking forward to seeing what this year brings, and hoping to have even more success, and so happy to have the opportunity to participate in such a great display of giving back to our community to encourage people to shop local. ”

Be sure to get in line early this Saturday, so you can take advantage of this great promotion. The line will begin outside of the Main Street Beaufort, at 101 West Street Extension (across from Common Ground and behind the Lollipop Shop).