Would you walk across the U.S.?

Rick Cohen is very passionate about drive in theaters and their survival. Rick owns the Transit Drive-In Theatre in Buffalo, New York. Since February 7th he’s been walking  the first leg of what will end up being a total of 1,034 miles; from Kissimmee, Florida to Camden, New Jersey, where the world’s first drive-in opened on June 6, 1933.

Expected to take at least six weeks, Rick’s journey brought him to Beaufort on Monday where he spent the day with Joe Barth, owner of Beaufort’s Highway 21 Drive In. On Tuesday morning, he will continue his trek up Highway 17 and eventually into Columbia, SC.

“We want to support Rick and help him get his message out,” Barth said. “It’s important for our industry. Its important for the mom and pop establishments and the families who own drive ins across the country.”

Beaufort’s Barth is a bright spot in the industry. He is actually working on building and opening a new drive in theatre in Columbia, SC near the airport, appropriately to be named ‘Airport Drive In’.

“Over the years, I have witnessed countless drive-in theatres close and be sold for development, or sit unused and forgotten. Hundreds and thousands of drive-ins have closed around the United States over the past several decades, with the property they sit on being redeveloped,” Rick  said.

“As if seasonal drive-in theatres didn’t already have enough going against them, technological changes in the way new movies are shown on their screens is requiring all theatres to replace 35mm projectors with expensive digital equipment, at a cost of roughly $75,000 per screen. Drive-ins which cannot financially afford the transition will eventually be forced to go dark., he added”

In fact, research shows that in the entire United States, the number of operational drive-ins at the end of 2014 fell to around 330 locations, down from around 350 sites only one year earlier.

“I am stepping forward with this fundraiser to help one of these drive-ins to buy a new digital projector so they can continue to provide the outdoor movie experience for their community. The drive-in which I have chosen to help make the conversion to digital is called the Auto-Vue , a single screen, family owned drive-in theatre located in Sidney, Ohio , which has been in continuous operation each summer since 1956.”

“My goal is to raise enough money to assist at least one small town, mom-and-pop drive-in to remain open, while at the same time raising national awareness about the difficulty which many rural, small town drive-ins are facing to survive”, he said.

Good luck to you, Rick.

Learn more about the plight of a part of Americana and about Rick’s efforts at http://www.driveinrescue.com/. 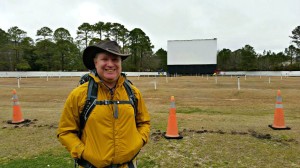