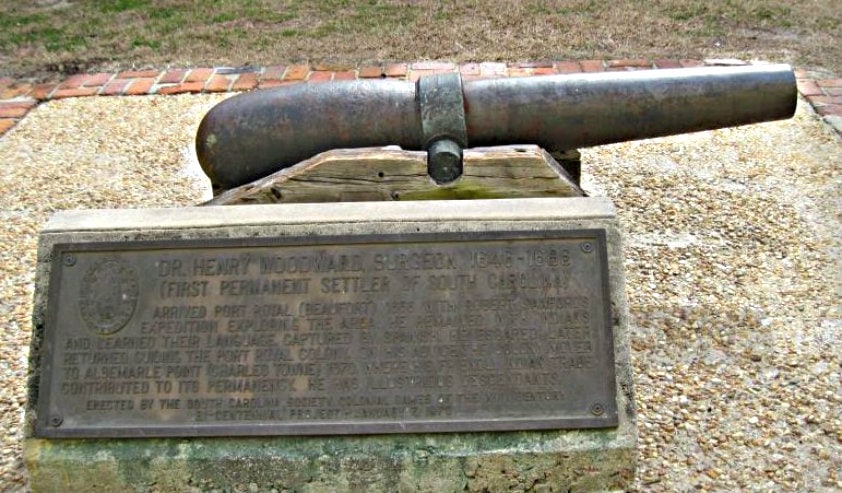 If you visit The Arsenal in downtown Beaufort you may notice a small monument dedicated to a man named Dr. Henry Woodward.  To most residents of Beaufort and the visitors who come to enjoy our town, this gentleman is a mystery.

He is actually considered the very first settler of South Carolina, and of Beaufort.

Not much is known about the early life of Dr. Henry Woodward. It is believed that he was of Scottish descent and born in Barbados. At the young age of 20, Woodward joined with Captain Robert Sanford on his mission to explore the Carolina coast. Before Captain Robert Sanford departed from the Carolina coast, he took a Cusabo native with him and left Woodward as a cultural exchange. Woodward lived among the Cusabo Indians to establish a bond and learned their language.

For his extraordinary efforts, he was granted tenant at will by the Lord Proprietors giving him temporary possession of the entire country.

In 1667 the Spanish of Saint Augustine heard of Woodward’s growing relationship with the Cusabo Indians and felt him to be a threat. They captured him and took him to St Augustine to be held in prison. The Spanish had a thriving trading tradition going with the Indians.

During his time there he gained a lot of knowledge about the Spanish-Indian trade system. In 1668 the privateer Robert Searle raided St Augustine freeing Woodward. Searle took interest in Woodward and invited him on to his vessel and made him ship surgeon. In August 1669, somehow Woodward ended up on the island of Nevis. Its not clear if he was shipwrecked there or put ashore by Searle and his men.

As luck has seen him before, the Carolina Fleet of 1669-1670, which eventually established Charleston, picked Woodward up from Nevis on their way to the Carolina coast.

When he arrived on the coast again, he used his knowledge he learned at St. Augustine to begin his career as an interpreter/Indian agent for the young colony.

In 1670 Henry began an expedition to the interior of the new colony making contact with many Indian groups. A few Spanish had preceded him but it was Woodward who was the first English colonist to make contact. He used his knowledge of for trade that he gained while hel

d prisoner in St. Augustine to help him in his relations with the Indians.

In October of 1674, Woodward, who was now widely known among Indian tribes, was visited by members of the Westo Indian Tribe at St. Giles Plantation, the Earl of Shaftesbury’s 1200 acre plantation in Carolina. It was here that, from 1674 to 1678, Dr. Woodward, now agent under Andrew Percival, conducted trade with the Indians. They ask that Woodward travel to their village on the Savannah river. While there Woodward started trading between Carolina and the Westos.

In 1684, the Scots founded a settlement called Stuarts Town in the Port Royal Sound area. The English Charles Town group never got along with the Scots of Stuarts Town. The Scots started their own trade with the newly arrived Yemassee Indians.

Woodward was arrested in Stuarts Town while passing through the area to meet with the Proto-Creeks of the Chatahoochee River. Lord Cardross of Stuarts Town wanted total control of the trade market with the Creeks. Woodward was soon released and may have assisted the Stuarts Town Scots and their Indian allies even though he was part of the Charles Town settlement. This may have been due to his Scottish ancestry. The 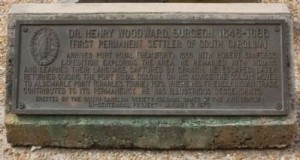 Yemassee Indians, aided by the Scots, conducted in raids on the Spanish settlements in Florida to bring back Indians to sell back to the Scots as slaves. Woodward and the other people of Charles Town denounced this act. In response to the Yemassee attacks in Florida, a Spanish counter attack destroyed Stuarts Town.

From 1675 to 1680 Woodward led perhaps a dozen Charles Town traders into the southwest area of modern Georgia. These were the traders that would take his place after he was gone.

He played a strong part in the discovery of new market among the Indians in the Chatahootchie River area.

Dr. Woodward was influenced by his early life in Barbados. His later skills in trading with the Indians he learned as a prisoner in St Augustine. Along with his knowledge of Indian customs and language, it made him a successful member of the early Carolina coastal colonies…giving him the title of the first settler of Beaufort.