Meet the O'Briens and Monkey's Uncle: Where a love for Beaufort meets a love for fun

By Abigail Kraft | Hopefully by now you’re aware that Beaufort is the proud home of a family-owned toy store on Bay Street. Monkey’s Uncle celebrated its one year anniversary during this past Water Festival and is already looking forward to many, many more.

Joe and Liz O’Brien opened the business with their two children and myriad others in mind and have loved watching it grow up with the kids.

“We want the kids who come in to bring their kids here one day,” says Joe, a Kansas City native with Lowcountry roots. “We’re already seeing visitors come 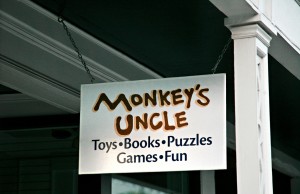 back when they come to town, and we want military families to feel like this is part of their home when they return to visit.”

Joe has had about twenty jobs and addresses since he was eighteen, but he’s finally found his calling with Monkey’s Uncle. After attending the University of Kansas and obtaining a journalism degree, Joe moved to Hilton Head to be the copy editor for the Island Packet. He used to come spend time in Beaufort and still loves its homey feel. After some time on HHI, Joe moved to Chicago to work as a freelance writer for a weekly neighborhood paper. During his nine years in Chicago, he also worked for WTTW public TV.

Chicago is where Joe met his now-wife Liz, Beaufortonian and daughter of Jim and Weezie Gibson. Liz was 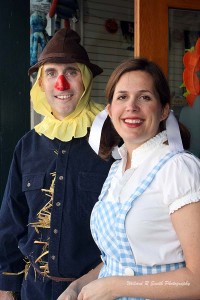 working in marketing and advertising sales at the time. Joe met Liz through a mutual friend, who was surprised that he even knew where Beaufort was, much less had spent time in Beaufort! After they married, Joe decided to attend law school at the University of Illinois. Their eldest son Emmett was born in 2004 and their daughter Nora in 2006.

The O’Briens moved to Beaufort the summer of 2007, where Joe practiced law for three and a half years before going into the car business. The O’Briens had always talked about owning their own business in Beaufort and when Ribaut Lanes closed during Thanksgiving of 2012, the O’Briens took a serious look at buying it, but ultimately decided against it. While discussing small business ownership, they consulted with Dick Stewart- who led them to some spaces on Bay Street. One of these spaces was 808 Bay Street, Monkey’s Uncle’s permanent home! 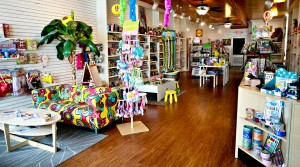 They feel that the success of the store is due to a number of factors. Locals love that it’s small and family-owned, eliminating the need to go to a big box store to buy toys and games for their children. They can even find many favorites from their own childhood. Monkey’s Uncle has a broad appeal; from the young enlisted Marine families, to native Beaufortonians, to retired grandparents who love to dote on their grandchildren. “It’s worth the trip to come to Bay Street,” Joe points out. “You get a personal, helpful experience where people know your name – and if they don’t, they learn it.”

Liz points out that “[Beaufort] is a very unique place from a personal and business perspective. We have visitors coming year round from around the United

States and the world, military families who come and go every few years (and some come back permanently), retirees and, of course, our wonderful, colorful native Beaufortonians. Not only is this mix of customers great for business, we just love meeting everyone coming in and out of the store and figuring out where they are from and what brought them here.”

There are several parents, families, grandparents and the like that the O’Briens consider Friends of Monkey’s Uncle, or FOMUs. Julie Musselman, parent of three and proud Beaufortonian, is one of them. “I always enjoy shopping at Monkey’s Uncle,” says Julie. “I love the selection of toys it has to offer- a wide variety for all ages and interests. Joe is very knowledgeable and helpful with gift selection and creates a personal shopping experience every time I go. We are so lucky to have this great toy store here in Beaufort.”

Joe sees great value in the future of Bay Street. “Monkey’s Uncle and our family is committed to Bay Street,” he says. “It is a huge draw for visitors and is great for the local economy. Monkey’s Uncle also brings people outside their bubble and elicits the best in them. Being in a fun, small toy store makes it easy to choose to be happy and have fun.”

Make sure you stop into Monkey’s Uncle to say ‘hi’ to Joe and Elizabeth. The store is located at 808 Bay Street, in historic downtown Beaufort.  You can also find them on Facebook here. 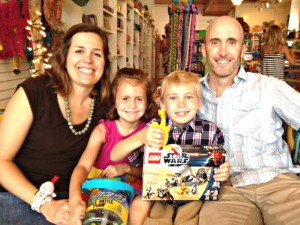