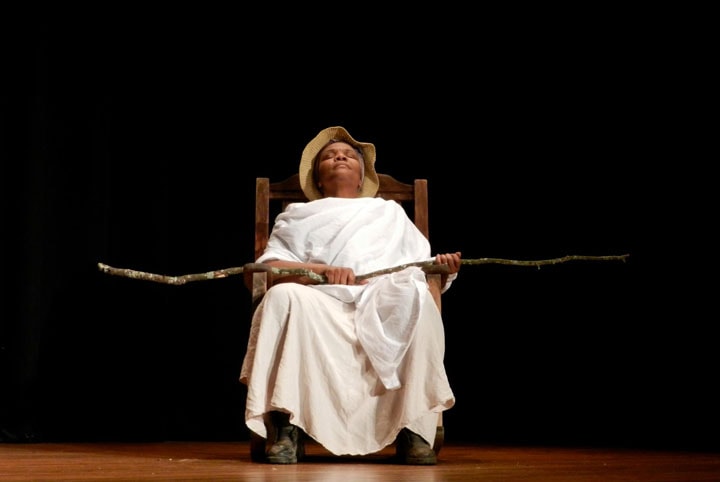 After appearing in both Charleston and New York, local artist and actress Natalie Daise is bringing her acclaimed one-woman production of Becoming Harriet Tubman back  to the stage here in Beaufort next week for one show only.

Becoming Harriet Tubman is a unique production offering a new perspective on an iconic tale. Through narrative and music, five real-life characters tell the story of how a 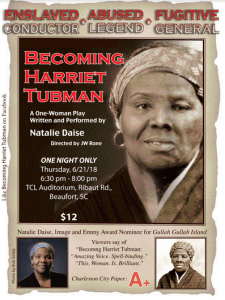 The production hits the stage at the Technical College of the Lowcountry’s Auditorium for one evening only on Thursday, June 21st at 630pm and is followed by a Q&A session with Daise.

The critically acclaimed show has been presented at Piccolo Spoleto, Charleston, SC; United Solo Theater Festival, in NY, NY; and other venues around the country. It was created here in Beaufort and was first presented at ARTWorks in conjunction with the Beaufort County Arts Council.

A local favorite for more than 30 years, Daise has developed and facilitated interactive learning experiences for educators, students, and audiences in schools, universities, conferences, and other venues. Her belief in the positive power of stories is demonstrated in both the performing and visual arts.

With the recent local interest in Harriet Tubman’s historic role in the Beaufort area on the rise, this would be the perfect time to take in the production. The Tabernacle Baptist Church in downtown, where Tubman hid in the Underground Railroad, has recently unveiled plans to erect a monument to Tubman on its grounds, next to the grave site of Mr. Robert Smalls.

Visit this link to get your tickets. You won’t want to miss this show. It’s Natalie Daise at her very best.