By Whitney Rauenhorst | Early Saturday morning, 32 teams of hungry raft racers gathered at Henry C. Chambers Waterfront Park ready to paddle their hearts out at the 58th Annual Water Festival’s Annual Raft Race. Sponsored by Beaufort Memorial Hospital, the Beaufort Water Festival holds a raft race, allowing teams of 11 or more people to compete for the title of Overall Champion. Teams consisted of different groups from family members, friends and co-workers from throughout the Beaufort area.

The race was about 50 yards in length and all 32 teams competed in one race, two teams at a time, then moved on.

For teams ‘Without a Paddle’ and ‘Pender Paddle Rats’, they’ve each competed in the raft race for the past four years.  The Paddle Rats have taken the win for the past three years, and this year wasn’t different, making this race their fourth win.

Pender Paddle Rats’ racer, Myndi Pender, has made it a summer tradition to participate in the race.  “It’s something that everyone started doing,” Pender said. “It’s a lot of fun. Everyone gets together first thing in the morning. [We] do the race and whatnot then hang out all day. It’s a family thing. Pender Bros. has been a big sponsor for the Water Festival for quite some time. It’s another way for us to get involved in the Water Festival, and it’s a good time. We come out and have fun.”

However, rafting isn’t as easy as it looks. Not only does it take an extreme amount of arm strength to paddle the raft, it also takes rhythm and coordination.

And the Pender Paddle Rats’ secret to winning? “Paddle as hard as we can. We’ve had the same team for the past four years, so we’ve gotten synced-up,” she said. “And it’s all about having a good rudder too.” According to Myndi, the rudder is the most important member because they steer the boat in the right direction. The direction to victory that is.

In addition to becoming the Overall Champion, the team also won the Fastest Overall Time and Top Commercial awards. ‘Shipfaced’, a local team of Marines, won the Top Military award and the ‘Roaring Rapids’ won the Top Non-Profit Organization.

Whether it’s win or lose, pure competition or fun, everyone enjoys their moment and will remember their time in the raft at the Beaufort Water Festival.

For hundreds of photos of all the events, visit our Beaufort Water Festival Photo Gallery here. 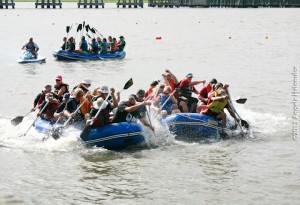 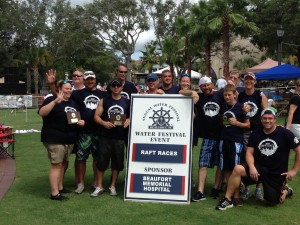