Preserving History at the Arsenal

Earlier today, crews from the City of Beaufort helped preserve a part of our history.

The base for one of the old guns that is on display at Beaufort’s Visitor’s Center was being eaten away by local carpenter bees, also known as ‘wood-boring’ bees and it was time to replace it.  The gun had been sitting in an old wooden base since 1991.
According to Visitor’s Center employees, the bees were scaring some of our out-of-town tourists, and they had a similar issue with another one of the gun bases that went unnoticed and led to an actual the collapse of the base. 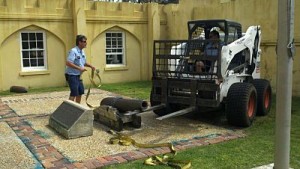