Lightning may have sparked the blaze that gutted a house in Beaufort’s National Historic Landmark District late Wednesday night, fire officials said today. The house in the 500 block of Prince Street wasn’t occupied at the time but witnesses to the fire told firefighters the structure had recently sold and was scheduled to have tenants move in next week.

Neighbors also informed fire investigators of a wood- burning smell during the early hours of the evening. Fire officials ruled this fire as accidental in nature.

“It appears this house fire most likely started from storm lightning,” Negron said. “Our firefighters worked hard to contain the fire, which is a tremendous concern in the Historic District where sometimes the homes are so close together and fire can jump from lot to lot.”

Shortly after 11 p.m. Thursday, the Beaufort Fire Department responded to a call about a house on fire on the Old Point section of historic Beaufort. Upon arrival, firefighters found a single story family dwelling where flames already were shooting through the roof, Negron said.

Firefighters from Beaufort Fire Department and Burton Fire District brought the fire under control in about 30 minutes. However, it took four hours to completely extinguish the blaze and smoldering remains, partly because the roof completely collapsed during the fire. This prevented firefighters from entering the building to fight the fire.

Fortunately, no one was injured during the fire, Negron said. Assisting in the fire operation were Beaufort Police and Beaufort County EMS. 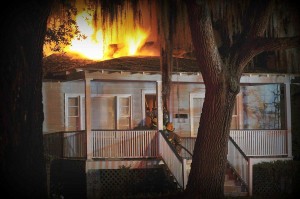