The Beaufort County Board of Education unanimously dedicated the athletics complex at Robert Smalls Middle School in the name of Rocco Cavalluzzi, a veteran teacher who passed away unexpectedly in February.

“Mr. Cavalluzzi was a dedicated teacher at Robert Smalls Middle School for seven and one half years of his 24 years of service to the Beaufort County School District,” Principal Denise Smith said in a formal request to the Board from the Robert Smalls School Improvement Council. “The SIC respectfully requests that the Board of Education honor this request for an educator whose service was not only given in the area of athletics, but also in classrooms preparing students for tomorrow’s challenges, the mentoring of new teachers to the profession, and for serving as a role model for so many young students.”

“This is such an honor,” said Angela Cavalluzzi, wife of Rocco Cavalluzzi and a teacher at Bluffton Middle School. “I can’t tell you what it means to our family. I don’t think we fully realized how many lives Rocco touched because he was such a humble man. It was never about him. It was always about his students.”

Board Chair Bill Evans passed the gavel to Vice Chair Mary Cordray so that he could make the motion to dedicate the school’s athletics complex.

“Rocco was a true professional who felt deeply about the young people he worked with,” Evans said. “He was passionate about his work in technology with middle school students at three different schools. And when the school needed someone to oversee athletics, Rocco stepped in and met that need. His first instinct was to always work to the benefit of students.” 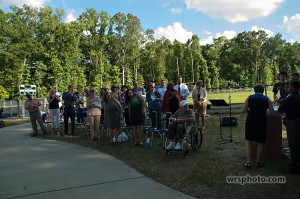