A Beaufort-based organization is working hard to help our troops overseas. Pillows for Patriots is shipping pillows to our troops in combat, our men and women in Iraq and Afghanistan in several branches of the military…so they can sleep better.

Three and a half years ago, Barb Farrior came up with an idea that has helped over 52,000 of our combat soldiers sleep a little bit better in what can be horrendous conditions in remote outposts and on patrols in Afghanistan and Iraq.

Army Capt. Justin Daubert was headed for his 3rd tour of Duty in Iraq. Marine Lt. Jonathan Bush was already at a forward operating base in Afghanistan.  As their moms, both Barb and friend Jenny Bush realized that one of the simple needs of their sons and all their 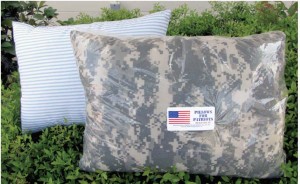 comrades in combat was to have a small, compact pillow, not issued by the government, which could easily fit in the field pack so during those rare moments of being able to rest, rest would be attainable.

With a plan of action and their goals shared by friends, John and Patrick Harris of Harris Pillow Supply in Beaufort, Pillows for Patriots was born.  John and Patrick donated quality, durable pillows to the initial project, and agreed to manufacture future pillows at their cost.

“Because of the generosity of John and Patrick Harris , we have been able to supply Army soldiers and Marines with a 12 X 16 inch camouflage pillow as they board a transport for combat duty.  They leave their hometown bases with all of their gear on their backs, and these small pillows take up no space—they can stuff them under a rucksack strap” said Jenny Bush.

The Harris’ make these pillows at cost, and because of the generosity and a sense of pride and empathy of Beaufortonians they have been able to give these men and women a break in what is likely the most intense and harrowing time of their lives.

“We have been privileged and honored to have been a part of giving a sense of caring and comfort to our amazing protectors”, Jenny said.

With thousands of combat troops still in Afghanistan, the need is still great.
Please visit Pillows for Patriots’ website at www.PillowsforPatriots.org, and share them on your facebook pages and blogs so that our troops fighting overseas can have just a little bit of comfort, from home. 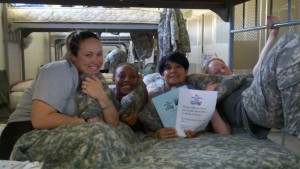