Enjoy a local production of “Same Time Next Year” this month at USCB Center for the Arts and with each performance, the “Tabby House” adoption center for Beaufort County Shelter cats will be in the lobby of the theatre to accept donations and talk about their successes in finding homes for 260 cats during their first year of operation.

Same Time Next Year is a romantic comedy about accidental lovers who stay together 25 years … for one weekend a year.

A chance meeting at an inn in northern California brings Doris, a stay-at-home mom, and George, an accountant and dedicated family man, together for one passionate night that turns into a 25-year affair in the romantic comedy, “Same Time Next Year,” in USCB Center for the Arts on February 21st, 22nd and 23rd.

George flies from New Jersey at the same time each year to meet with an old client and stays at the Sea Shadows Inn. Doris drives up from Oakland for a retreat with Catholic nuns on the same weekend each year. One year she stops at the inn for dinner and meets George in the restaurant. An evening of intimate conversation leads to an overnight tryst, which neither fully understands but both don’t want to end. They agree to meet at the same time and place next year.

From that beginning the audience is given “snapshots” of their weekend rendezvous every five years of their relationship from 1951 to 1975, when the play by Bernard Slade debuted on Broadway. That year it won the 1975 Drama Desk Award for Outstanding New Play and was nominated for a Tony Award for Best Play. It ran for the next four years and was made into a movie in 1978.

Over the years their growing emotional intimacy deepens their bond as much as does their physical attraction, and they talk more about the changes in each other than what happens between the sheets. They support each other through their respective marital problems, career challenges and personal tragedies, while maintaining their no-strings-attached love affair. “It is this combination of love, humor and support that I think rings true with audiences,” says play director Andrea Drake. “Over their 25 years together, there is much we all can relate to in what they are experiencing – it is the empathy of a caring relationship combined with the universal humor of everyday life.”

Like the year Doris shows up for their assignation pregnant with her fourth child, and George is anticipating that she will be able to help him with his impotence. Another year she has been attending Berkley and taken up the charge of women’s lib, which just about ruins that weekend when George admits he voted for Goldwater. 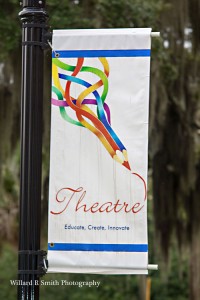 Doris is played by Christine Grefe, who saw the movie years ago and as a result, the role has been on her “bucket list” ever since. “We first see Doris as a very naïve but comfortable-in-her-own-skin woman,” says Christine. Over the 25 years she goes from an uneducated young wife and mother to an accomplished business woman. “She doesn’t get flustered like George. She just accepts the changing situations through the twists and turns of their relationship.”

Poor George – guilt-ridden with the reality of his betrayal, you think he will never be able to get it together, fighting his addiction to Doris at the same time he is reveling in his ecstasy. “Doris is really the catalyst for his personal growth,” observes Michael Weaver, who plays George. “The play and their relationship is not so much about infidelity as it is about how the bond between a man and a woman can be a truly life-changing experience. It is an easy play to enjoy and even an easier story to understand.”

Both Michael and Christine are well-known in Bluffton and Hilton Head theatre circles and between them have appeared in a number of productions for the May River Playhouse, the Performing Arts Center of Coastal Carolina and USCB Center for the Arts in Beaufort, as has their director, Andrea Drake.

“Everything that happens, happens for the audience and, for a director, this is quite a challenge,” observes Andrea. “We get to know the spouses we never meet because each year Doris and George tell each other one best thing and one worst thing about them.” She credits both her actors with the talent and sensitivity to make their characters their own. “The story works because the audience can relate to the real life situations of George and Doris on so many levels.”

Andrea is an accomplished actor with a background in community and regional theatre in New York. She has appeared in over 35 plays and since moving to the Lowcountry has continued to perform and direct. She is an educator by vocation with a Masters Degree in English from Stony Brook University in NY. “Being an English teacher has always influenced my acting and directing,” she says. “I love words and the power they have to convey emotion from the actor to the audience.”

Center for the Arts partnering with Tabby House for fundraiser

At each performance, the “Tabby House” adoption center for Beaufort County Shelter cats will be in the lobby of the theatre to accept donations and talk about their successes in finding homes for 260 cats during their first year of operation.

Jessica Weiss, Tabby House Manager, said the need is great for items on their “Wish List” and also cash donations. Jessica goes to the Beaufort County Shelter every week and selects the cats to bring to Tabby House to keep the population at around 25 cats. “The county helps us pay for food, medicine and utilities, but we really depend a lot on contributions and our wonderful, loving volunteers,” said Jessica.

Come in and visit with the free-roaming residents who would love to sit on your lap for pets. Also consider becoming a volunteer to provide frequent attention for the cats to keep them socialized and adoptable.

Curtain time for “Same Time Next Year” is 7:30 p.m. on Friday and Saturday, and 3:00 p.m. on Sunday. Tickets can be purchased online at www.uscbcenterforthearts.com , or call the box office at 843-521-4145. Adults $22; Seniors $20; and Students $15, all seats reserved. Tickets are also available one hour prior to curtain. The theatre is located at 805 Carteret St. in downtown Beaufort.