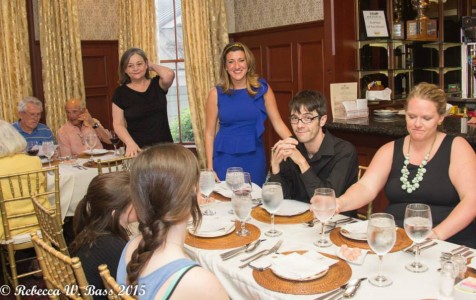 By Libby Ricardo | On Shakespeare’s 451st birthday, and consequently the 399th anniversary of his death, I gathered with fellow company members and friends to toast the Bard and to unveil the 2015-2016 Shakespeare Rep Season.Gathering at Southern Graces Bistro at the Beaufort Inn, fans of the prolific playwrights and Beaufort’s only professional theater company enjoyed fantastic fare and great news- Shakespeare Rep is planning a Season of Legacy and the Lowcountry is invited.

Before unveiling the three main stage shows planned, the resident company was able to speak about the unique educational programming Shakespeare Rep plans to offer the Beaufort Community, beginning May 9th.There are five diverse summer workshops planned, as well as a week-long Teen Summer Intensive, June 8th-12th.  Beginning in the fall, Shakespeare Rep will resume its successful Apprentice program, which affords high school students the opportunity to train classically with professional instructors, free of cost.Weekly acting classes for thespians of all ages and experience will pick up in September also.

Christine Grefe was tasked with announcing an exciting new facet of the Shakespeare Rep Season, an educational tour of Romeo and Juliet.  Shakespeare Rep plans to travel to 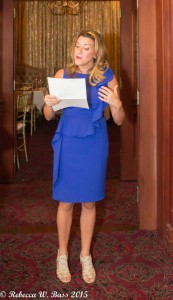 high schools in the Lowcountry with a troupe of actors to bring the infamous story of love and woe right into the classroom.  After the performance, actors will stay to field questions not only about the performance, but also about the Shakespeare and his enduring legacy.

Debra Charlton, Artistic Director of Shakespeare Rep, was the next to take the stage to announce the company’s fall show.  In a play that has been described as “Shakespearean style verse meets Monty Python”, Trapezium revisits the classic tale of two other star crossed lovers, Tristan and Iseult.  Written by Henry Rathvon, famed crossword puzzle writer, this play will surely delight audiences with its clever wordplay and dynamic characters.  The opening matinee on Sunday, November 1st at ArtWORKS will be followed by a Medieval-themed Gala.

Next to be announced were two of the most beloved plays in Shakespeare’s canon.   Resident company members will again be joined by phenomenal guest artist from across the country next March and April to perform Hamlet and Much Ado About Nothing.  Associate Artist Santiago Sosa will make his Shakespeare Rep directorial debut with Hamlet, which will be performed at the newly renovated ArtWORKS theater space.  Much Ado About Nothing will take advantage of Shakespeare Rep’s relationship with the USCB Department of English and Theatre, and will not only feature professional actors, but some University participants as well.

As the evening drew to a close, everyone raised a glass to the Bard.  After over 400 years, people are still coming to the party.

Season tickets for the three main stage shows are now on sale.  If you would like to purchase your own season subscription or have questions about Shakespeare Rep’s educational programming, please email info@shakespearerep.co.