Spring brings the spawning of our local horseshoe crabs 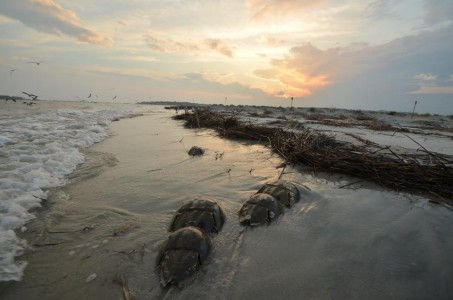 Spring is the time for mating season for one of the coastal creatures we frequently see along the beach at Hunting, Fripp and Harbor Islands.It brings the spawning of horseshoe crabs. Looking like miniature armored tanks, horseshoe crabs surface to spawn in great numbers along Beaufort’s shores, drawn ashore by full and new moons and when tides are highest. And, what a sight it is to behold.

Horseshoe crab spawning season varies according to latitude, but it generally peaks in May, with peak spawning occurring on evening high tides during the full and new moons.

While some horseshoe crabs come ashore during the day, the majority will wait for the cover of night. Then, scores of them will emerge from the sea to begin a ritual that has been repeated for more than 450 million years. The females will come first, many with males already in tow in search of a bit of sand to lay their eggs. The females are considerably bigger than males to accommodate the thousands of eggs beneath each helmet-like shell. The females dig nests in the sand before they drop off their young and return to the water. 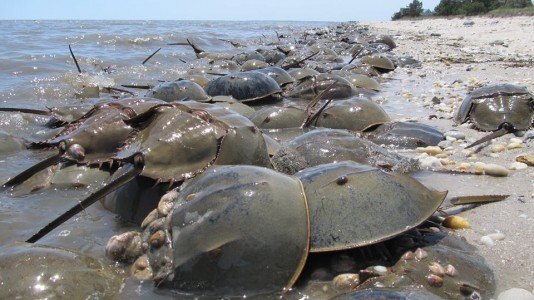 Closer in relation to the spider or scorpion that it is to crabs or lobsters, the horseshoe crab lives primarily in and around shallow ocean waters on soft sandy or muddy bottoms. Horseshoe crabs are often called “living fossils” because fossils of their ancestors date back almost 450 million years–that’s 200 million years before dinosaurs existed. Despite inhabiting the planet for so long, horseshoe crab body forms have changed very little over all of those years.

Many people view horseshoe crabs as dangerous animals because they have sharp tails. In reality, horseshoe crabs are harmless.  Their tails are used primarily to flip themselves upright if they are accidentally overturned.

In fact, horseshoe crabs help save thousands of lives every year. Nearly 50 years ago, scientists discovered the horseshoe crab’s clotting-response to bacterial toxins. Now, its blood is harvested in huge quantities, to be used in a test to ensure medical products are not contaminated. According to a recent CNN report, The U.S. Food and Drug Administration (FDA) requires that intravenous drugs and any medical equipment coming in contact with the body must first pass through the crab’s blood, from needles to surgical implants including pacemakers. As a result, thousands more of us survive such procedures.

Sadly, in recent years, a decline in the population has occurred as a consequence of overharvesting along the east coast of North America. We see their shells along the beach from time to time, usually the result of a stranding. Once a horseshoe crab is flipped on its back, it’s certain peril, and stranding is sure to come.

The South Carolina Department of Natural Resources frequently monitors, surveys and tags horseshoe crabs on Harbor Island with the help of volunteers. Periodically, throughout the year, SCDNR offers many programs in which local citizens can take part in volunteering.

“SCDNR has participated in the annual horseshoe crab tagging program administered by the U.S. Fish and Wildlife since the program began in 1999,” said SCDNR assistant marine scientist Dr. Amy Fowler. “In 2014 we tagged 1,388 horseshoe crabs throughout Port Royal and St. Helena Sounds.”

Tracking horseshoe crabs can provide critical information about where they’re distributed, how long they live, and seasonal movements – data that will also inform scientists’ understanding of the shorebird populations that depend on horseshoe crab eggs.

“Most people think of Delaware Bay when they think of horseshoe crabs, but South Carolina also has spawning crabs,” said SCDNR wildlife biologist Janet Thibault. “Shorebirds like the red knot stop over at crab spawning sites on South Carolina beaches to gorge themselves on eggs. These shorebirds have a long way to go, migrating from the southern tip of South America up to their breeding grounds in the Arctic.”

If you seen an upside-down horseshoe crab stranded on the beach, officials suggest saving a life by flipping the crab. As many as 10% of horseshoe crabs may die each spawning season as a result of stranding, according to one study.