The story of St. Helena Island's Historic Chapel of Ease

This beautiful relic of a church known as the “Chapel of Ease” is located on St. Helena Island.

During the colonial era, planters on St. Helena Island grew indigo and eventually sea island cotton. The main church of Beaufort was too far away for the planters to travel back and forth to worship, so the Anglican Church established this ‘chapel of ease’ to help the families attend church on a regular basis.

The definition of chapel of ease is a ‘chapel founded in general at some period later than the parochial church itself, and designed for the accommodation of such of the parishioners as, in course of time, had begun to fix their residence at some distance from its site; and so termed because built in aid of the original church’.

In this case it’s the historic St Helena Episcopal Church.

The Commons House of Assembly, under the Lords Proprietors of Carolina, established St. Helena’s in 1712 as a colonial parish of the Church of England. The church in downtown Beaufort was built in 1724 and is one of the oldest active churches in all of North America. Some of the wealthiest and most prominent families in the American South were represented in St. Helena’s Church. Among them were Barnwells, Heywards, Elliotts, Rhetts, Fullers, Graysons, Wiggs, and others. The parish and the town produced many men of mark in politics, scholarship and religion during the Antebellum years.

The Chapel was built in 1740, made of tabby, and it served the area until the union troops came ashore in November of 1861.  On November 4th, 1861 Sunday services were interrupted by a messenger who brought news of the impending invasion of nearby Beaufort by Union troops to a Captain William Oliver Perry Fripp.
With the arrival of those Union forces in 1861, the church never again regained its stature.

Stories relate that Union soldiers used it for services during the war, as well as northerners who came to the area, also called carpetbaggers, after the war to educate and train the former slave population.

The church was burned by forest fire in 1886 and it was never rebuilt. It still stands as a wonderful reminder of an extraordinary era. The remains of the church are not without their haunting stories either. It is said that on a silent night you can hear whispered prayers and singing emanating from the interior of the chapel.  Still others claim to have heard names being shouted in the silent burial ground, or the in the surrounding forest.

This historic site was added to the National Register of Historic Places in 1988. 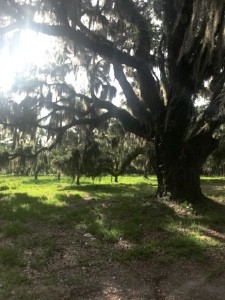 An Update from Friends of Whitehall Park