ARTworks has announced the line-up for the second half of it’s wildly-popular StreetMusic on Paris Avenue series and it looks just as good as the first half was in both May and June.  While anyone can put on a mere concert, ARTworks succeeds in bringing acts that reflect music as the art… that it actually is.
Street Music on Paris Avenue is a free concert series that is a gift from the Town of Port Royal and produced by ARTworks, the arts council of Beaufort, Port Royal and the Sea Islands. All the concerts are free at 6pm, bring your chairs and dancing shoes. The rain location is The Shed, adjacent to the street venue, in Old Village Port Royal. For more information, contact ARTworks at 843-279-2787.

Saturday, August 11 @ 6pm
Gas House Gorillas
Gorillas loose on Paris Avenue! Rick Fink and his Gas House Gorillas bring their olio-slicked Jump Blues, Gypsy Swing, early Rock ‘n Roll, Cajun music and even the occasional funk groove to Old Village Port Royal. The band’s name is taken from a Bugs Bunny cartoon, and these apes live up to it: tattooed tenor Rick Fink, Stu Newman on guitar, Crusher Carmean on bass fiddle, saxsmith Seltzer Jim Davis and drumthwackin’ Eddie Everett are the souls of integrity when it comes to rockin’ the joint in classic fashion. “All. I. Can. Say. Is. Wow.” — Maria Miaoulis, Jazzville

Saturday, August 25 @ 6pm
Zac Harmon: Music is Medicine
Born and raised in Jackson, Mississippi, Harmon is a disciple of the Farish Street blues sound. During the 50’s and 60’s Harmon hung out at his 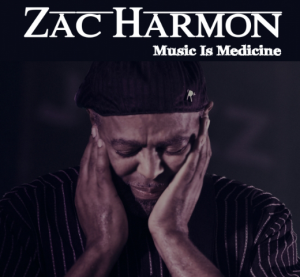 father’s pharmacy on Farish, soaking up the aura and sounds of the musician customers while developing his skills as a guitarist, organist and vocalist. His career encompasses guitaring for Z.Z Hill, Dorothy Moore, McKinley Mitchell and Sam Myers; crafting songs for Karyn White, Freddie Jackson, Evelyn “Champagne” King, The Whispers, Cherrelle, K.C. & Jo Jo, The Mississippi Mass Choir and Children’s Choir, Alexander O’Neal and the O’Jays. His 2002 album, Live at Babe & Ricky’s Inn, is an electrifying testimonial, featuring eight original songs that embody the Mississippi blues sound. In 2004 he won The Blues Foundation’s International Blues Challenge. “Harmon and his Mid-South Blues Revue slammed the blues to the ground and blew the roof off the joint, which was especially impressive as this venue was outdoors. The first tune made the hair on the back of my neck stand up, always a good sign.” – Mike Ross, Edmonton Sun.

Saturday, September 8 @ 6pm
Members of the Savannah Jazz Orchestra play Ella, Sinatra & More
~ a jazz quintet including jazz vocalist Terry Herron, and trombonist and Savannah favorite Teddy Adams. Born in Savannah in 1941, Teddy Adams is one of the first inductees in the Savannah Coastal Jazz Association Hall of Fame. He is on the Board of Directors for the Coastal Jazz Association, and co-leads the Savannah Jazz Orchestra. He has performed around the world (including attending a music conservatory started Sadao Watanabe in Tokyo) with Cab Calloway, Irene Reid, James Moody, Clark Terry, Jeanie Bryson, Johnny Lytle, Joey DeFrancesco, Ernie Andrews, Wynard Harper, Ben Riley, Doug Carn, Dave Steinmeyer, Pete Minger, Delbert Felix, just to name a few. “Teddy Adams is a jazzer’s trombonist– his straight-ahead jazz perfomances are crafted from in-depth musical experience and knowledge. He emotes– he blows cool and hot, smooth and rough– always within the context of the musical piece being performed. When Teddy plays, you always know it’s him.” — WE Murphy, Jazz Journalist Association 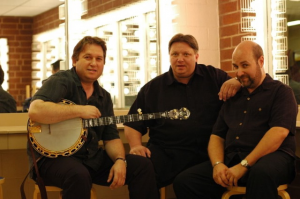 The Kruger Brothers
Jazz. Classical. Bluegrass. The music of the Kruger Brothers is all of that and more, as they celebrate the best of what music can be: exciting, engaging, intelligent, and delightful. Now living in North Carolina, the brothers Jens and Uwe were born and raised in Europe and performing by the time they were 11 and 12 years old. Joel Landsberg, a native of NYC joined the brothers in the early 90s. Jens Kruger (banjo, vocals), Uwe Kruger (guitar, lead vocals), and Joel Landsberg (bass, vocals) personify the spirit of exploration and innovation that forms the core of the American musical tradition. The National Endowment for the Arts supported them with a grant for Music from the Spring, a symphonic suite composed and orchestrated by Jens. In 2010, the Kruger Brothers premiered a new work for banjo, guitar, bass and string quartet titled “An Appalachian Concerto.” “The Kruger Brothers are just about as fine a band as I’ve ever played with…I love to play music with them.” –Doc Watson.

-ARTworks is the community arts center of Beaufort, the coolest arts council in the Carolinas, and applies the many creative tools of The Arts to strengthen artists, and enrich audiences, collectors, and visitors through high quality arts experiences and arts education programs 365 days ayear. ARTworks is located at 2127 Boundary Street, in Beaufort Town Center, SC 29902, http://www.ArtWorksInBeaufort.org, 843-379-2787.