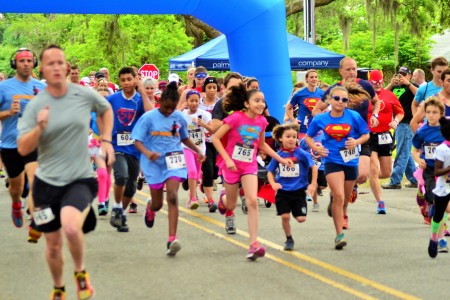 By Shannon Roberts | At 7:30 on Saturday morning in Port Royal, caped and masked superheroes began to gather in Live Oak park under a canopy of shade trees. Several Batmans (Batmen?), Wonder Womans (Wonder Women?), a few Green Lanterns, Supermans, Hulks, and an assortment of Iron Mans chatted casually while occasionally dropping to stretch or execute some leg swings. A casual observer would have wondered if the Daily Planet was doing interviews or Stark Industries was conducting a job fair. But alas, the gathering was in anticipation of the start of the Superhero 5k, a race to benefit the Port Royal Elementary Girls Run Club.

The Port Royal Elementary Girls Run Club has been training for this day, encouraging each other along the way and learning that they have limitless potential if they work hard. Martha McDuff and the other sponsors of the Girls Run Club provided coaching, motivation, and weekly training for these girls to complete a 5k race and cross the finish line under their own, newfound superpower power.

Lining up with the girls at the start of the race were almost 200 superhero-clad runners. Kids, parent-child combos, and local cross-country runners throwing it down in fast competition 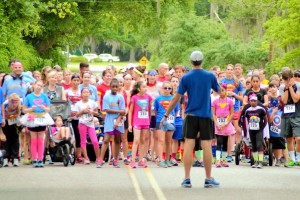 were amongst the participants. Palmetto Running Company made their announcements and started the race right on time as the caped crusaders took off under the start arch, activated their electronic chip, and flew down 14th Street, across Paris Avenue, and into the town of Port Royal’s friendly and quaint neighborhoods. The race was well-marked, and cheering volunteers dotted the route, pointing the direction at every turn. Around mile 2, the course opened up into the the panoramic view and cooling breezes on The Sands Beach Road. Runners were treated to views of ospreys and expansive marsh and river while being cooled by the salty breeze. This section of the race was a tremendous way to get that extra boost, lifting runners along their final mile.

The race finished where it started, at beautiful Live Oak Park. Spectators lined the finish, cheering loudly as each runner finished their 3.1 miles. Amongst them the PRES Girls Run club were cheering each other the loudest, as they all finished strong, strong like the superheroes they have become. 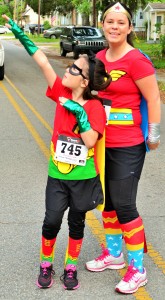 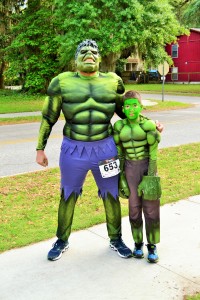 In addition to run times, awards were given to costume winners:

Full results can be found at: http://www.palmettorunningcompany.com/events.html
See more fun photos of the event here, on our Facebook page: