The Barnwell House: From castle to courthouse to museum

One of the most beautiful antebellum homes Beaufort, South Carolina has ever had the privilege to showcase is the “Barnwell Castle”…

Beaufort has such a deep and amazing history that spans over a vast period of time. Most of our beloved history is still remembered through books, lectures, and stories passed from generation to generation.

We have the privilege to be able to look upon some of the most beautiful antebellum homes the south has to offer. Some are dated beyond the Revolutionary War and some as new as just before the Civil war. Every one of these homes has a story to tell. But what about the homes that are gone or forgotten? There are many that have been lost to fire or natural disaster.

One of these forgotten homes that stands out as the most beautiful Beaufort has ever had the privilege to showcase is the “Barnwell Castle”.

This massive castle was built around the Revolutionary period by two members of the Barnwell family. Edward and Robert Barnwell built this four-story mansion on the corner of Bay and Monson streets. They built it on two lots their father left for them to divide equally. They decided to build their homes into one massive duplex made mostly out of tabby. Edward owned the east side and Robert the west. Edward had a more expensive taste then Robert, causing his half of their castle to be more elegant and cost twice as much. The front had two separate staircases and two separate entrances.

The castle was so massive that a lighted lantern was placed on a high post in front of the house to guide boats coming up the river.

The Barnwell family has been an influential part of Beaufort and South Carolina’s past. They are descendants of Dr. Henry Woodward, the first settler of Beaufort. The Barnwell men have fought in the Indian wars, Revolution, and Civil war. Colonel John Barnwell, also known as Tuscarora Jack arrived on the coastal shores of South Carolina in 1701 as an immigrant from Ireland. He led an army against the Tuscarora Indians from 1711 to 1712. He also represented the colony of South Carolina in talks with England informing the government and is the most responsible for the founding of Beaufort.

His son, Colonel Nathaniel Barnwell, was an aide to General Oglethorpe in the expedition against St. Augustine in 1740.

Robert Gibbes Barnwell, son of Colonel Nathaniel Barnwell, was speaker of the house of representatives and president of the senate of South Carolina. He was a delegate to the continental congress and a congressman in 1791. He was also a courageous soldier in the Revolutionary War, in which he received no less than seventeen wounds. Robert was only 14 at the start of the Revolutionary war. When he was 15 he joined Colonel Bull’s regiment to fight for freedom from the King. Edward was a bit older, 18 at the time of the war. He joined right along with his brother for the cause. Edward would be rewarded the rank of colonel for his heroics and devotion to the patriots. After the war, he and his brother Robert would inherit a large amount of property from the passing of their father. Edward would become a very successful planter. Robert would follow his lead.

The castle remained in the Barnwell family until it was confiscated by Federal troops during the Civil War.

Beaufort remained occupied by Federal troops throughout the entire war. During this period the Barnwell Castle was turned into hospital #5 for the Union troops. It was only used as a hospital for a short period of time which then it is believed to have become home to Federal officers.

When the Civil war was over, the Castle was used for the county courthouse. It sat on our bluff overlooking the Beaufort River until it was consumed by fire sometime in the early 1880’s. In 1883 construction on the new federal district courthouse began in its place. Completed in 1884, it sits atop the castle’s foundation walls. Today we see the federal district courthouse that sits on the corner of Monson and Bay streets.

Early in 2015, Beaufort County leased the old federal courthouse to house a history museum and the main offices for the Santa Elena Foundation. 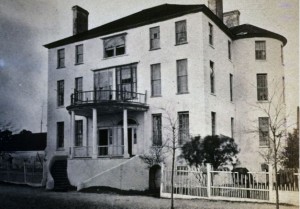 Story was written by Donna Perry