The Farmer's Table at Habersham: Celebrating our community through food

By Stephanie Venz | Let me set the scene for you… you’re at the wonderfully quaint Habersham marketplace, and a live jazz band is playing in the background while you are sipping on the night’s signature drink “The Charleston Mule.” The tables are beautifully adorned with rustic fall touches including pine cones and greenery, and the lovely volunteers serve beautifully presented food to you. And the best part – this annual event named “The Farmer’s Table,” is all is the name of charity.

Now for all the delicious details. Originally the event was planned for Saturday night November 1st , however the unkind cold and windy weather conditions resulted in the event being 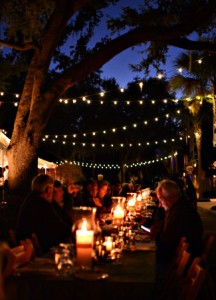 postponed until 4pm, Sunday November 2nd . Let me just say, I am so glad the event was postponed. While the weather was still extremely cold on Sunday, the night was clear and calm. We started the event at 4pm with some inventive and somewhat southern inspired cocktails, including the signature drink named the “Charleston Mule,” as well as Apple and Rum ciders, and a nice selection of red and white wine.

Accompanying the drinks were a selection of tasty appetizers, including: 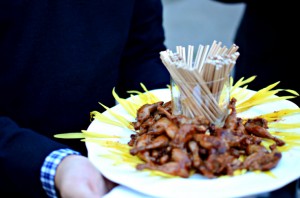 Personally, my favorite appetizer was the “southern caviar on a corn cake,” however I heard many others exclaiming that they loved the smoked swordfish appetizer.

At 5.30pm we were asked to take our seats to commence the four-course eating extravaganza. I don’t want to make you too jealous by going into all of the little details so I will just give you a quick overview.

The starting breads and infused olive oils were all provided by Beaufort Bread Company – my absolute favorite source of fresh baked breads in all of Beaufort. The first course was a Frogmore soup, with local shrimp and clams. This dish was very good and the warm soup was most appreciated in the cold temperatures of the night.

Next we moved onto a marinated kale salad, with shaved baby carrots and farro, abenne seed dressing and crispy shallots. It was at this stage that some friends sitting across the table from me said, “this food is even better than last year’s Farmer’s Table!” Enough said.

Course three consisted of a roulade of N.C. pheasant, Carolina gold rice perloo and carmelized butternut squash. For those who haven’t eaten pheasant 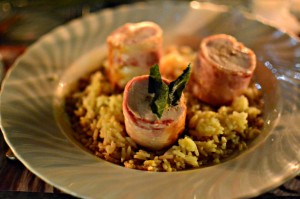 before, you must know that it is a type of game bird. Tonight’s meal consisted of white pheasant meat, and the consistency and shape reminded me of a fancy sausage.

The meat was tasty, especially when combined with the sweetness of the rice and carmelized squash. 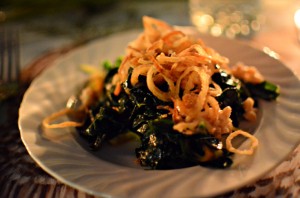 Finally, course four was one of the most important dishes of the night, dessert. It was a delectable Harvest Pumpkin Cheesecake with a cranberry relish. The relish certainly balanced the dessert out beautifully, and everyone around me was scraping the plates to get in every last bite.

Eight locally recognized chefs came together to make the food of the night a success, with each chef contributing their own flair to the effort. Jim Spratling, the Executive Chef at Callaswassie Island Club headed up the team for the event.

But this event was not all about the food.

Make sure you buy your tickets early next year – it’s sure to be another sell out.
For hundreds of photos from the 2014 Farmer’s Table, visit our Photo Gallery here. 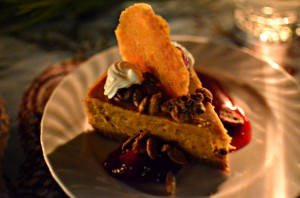 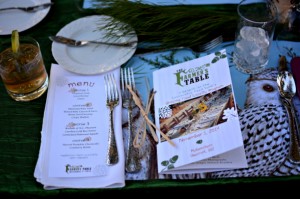