The Happy Boat: A part of the quiet current of Beaufort's simplicity

By Elizabeth Bishop Later | Driving over the Woods Memorial Bridge into Beaufort provides a picture of all that is fine about Beaufort. To the left lies the waterfront and marina, its sailboats resting in the soft swells of the river. The seawall and Old Point homes lie to the right, stationary cannons reminding us of the city’s Civil War history. The spires of St. Helena’s Episcopal Church and the Beaufort Baptist Church stand tall, icons of history and faith. The tide – incoming or outgoing – provides a constantly changing picture of sandbars and shorebirds. It’s a beautiful sight – all that is right about Beaufort.

And then, of course, there’s the Independence (fondly called the Happy Boat at our house), which showed up in Factory Creek a couple of years ago and people wondered, “what the heck”? In the beginning it was unadorned then the smiley face appeared. It was quite the mystery for a while until the owner, Bill Slachta, cleared up the conundrum. (You can read that story here.)

The other day the wind blew it into the Factory Creek dock; for another brief moment the Independence was in the news. And then the fight started. Well, not really a fight, but certainly a healthy debate between those who have learned to embrace its presence and those who haven’t quite come to terms with it. They expressed their opinions about the watercraft in short phrases ending with double exclamation points. It’s an eyesore!! Get rid of it!! Fine the owner!! You could practically smell the smoke from the torches and hear the clanging of the pitchforks. I guess for those folks it just doesn’t fit with their idea of “Beaufort” and what “Beaufort” should be.

So, for what it’s worth, here’s my perspective.

Beaufort is a beautiful place with a whole continuum of southern experiences to enjoy, from carriage tours around the Old Point to fine food on Bay Street. Bed and Breakfasts provide the perfect step back in time, giving visitors a little taste of the historic, romantic south they come to savor. It’s a perfect environment for social butterflies to get their fill of oyster roasts, nights on the town, and cocktail parties.

But that’s what’s on the surface. Look underneath and you’ll find hometown people with humble roots – farmers, shrimpers, the salt of the earth. You’ll find our military, protecting us and inspiring us with their patriotism and love of country. You’ll find people whose idea of a day on the river is dragging the john boat to the river shore and launching off, a 10 horsepower motor putt-putting them to the nearest sandbar where they can dip an old rotten chicken neck in the water and catch some crabs for supper. You’ll find a quiet current of simplicity and humility.

While I love everything about Beaufort – it’s romantic southern image, it’s antebellum homes, it’s draw for tourists – the real Beaufort I love is a simple, unpretentious place – a place of dusty dirt roads and steamed okra, church suppers and family, the acrid smell of pluff mud and the incessant sound of cicadas. For those of us who grew up in Beaufort the sparkly shine provided to tourists is just that – sparkly shine – but doesn’t wholly reflect all that we love about Beaufort.

For me, the Independence [the Happy Boat] is, in its own way, completely representative of the place I call home. Its straightforward, transparent message is “Hey, I’m not very pretty but I can take you out on the river and we can go shrimping and swimming and spend a whole summer afternoon getting a beautiful sunburn together”. Maybe I’m partial to it because my dad built his own boat once, then sold it after its maiden voyage presented so much anxiety for my mother that he realized its destiny was not to be the watercraft he envisioned. It wasn’t much prettier than the Independence, but nobody in Beaufort complained about those kinds of things in 1975.

The river is there for all to enjoy, whether you have an expensive yacht or a dinghy; a 30 foot sailboat or a hand-made ark with a smiley face painted on the side. As Matthew Goldman wrote, “One takes what the river offers, both good and bad. The joy of living by running water far outweighs the sorrow.”

So the next time you’re driving across the bridge, try to accept that everything you see represents something that makes Beaufort a wonderful place – the church spires, the antebellum homes, the expensive yachts at the marina, the Old Point – and the Happy Boat. 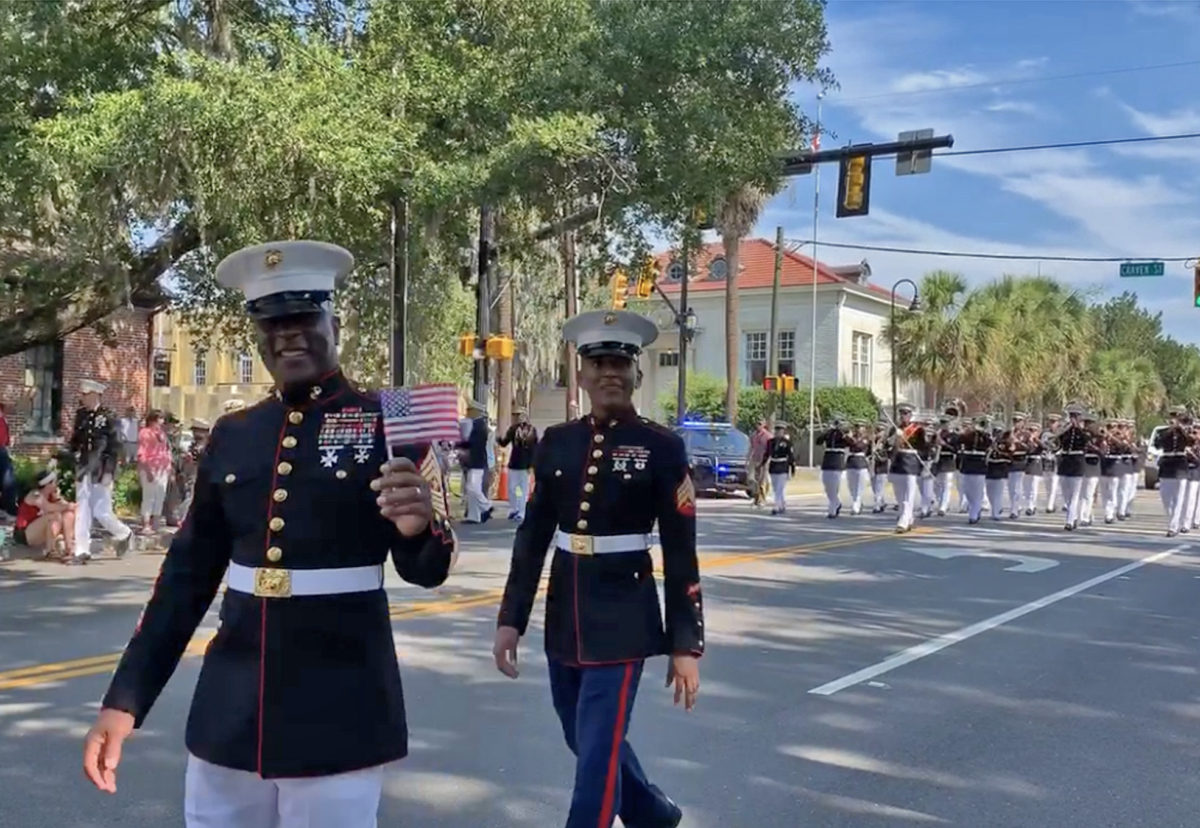