The Sea Island Hurricane of 1893, 4th deadliest in U.S. history

A major hurricane which eventually came to be known as the Sea Islands Hurricane struck head-on near Savannah, Georgia.

The date was August 27th, 1893. The surprise storm killed an estimated 2,000+ people, mostly from the heavy storm surge that it carried with it. Many of the dead were inhabitants of the Sea Islands of Beaufort, with 20,000 or more left homeless as nearly every building along the barrier islands were damaged beyond repair. Some estimated it’s storm surge to be a whopping 16 ft. This caused a great deal of destruction along the coastline and Sea Islands in both South Carolina and Georgia.  Along with much smaller local islands, St. Helena, Hilton Head, Daufuskie, Parris, and Lady’s Islands were all devastated.

With the loss of life involved, mostly by drowning, this hurricane is actually on a level with 2005’s Hurricane Katrina as the fourth deadliest hurricane in United States history. This estimated death toll may actually be conservative when you consider the large populations of rural African-Americans on the Sea Islands who at the time had little means of reporting casualties.

Few warnings were ever given about incoming hurricanes in those days.  Even few accurate meteorological records were taken back at that time, but modern science has recreated the patterns that led to the deadliest storm in Beaufort.

By the evening of the 25th of August, the Category 3 storm was approaching the Bahamas. During the approach, it began to deviate from its westerly course and arc west-northwest. It is believed that the first effects of the storm were beginning to be felt in the Sea Islands area, with the winds steadily increasing during the night of the 25th.  Some of the inhabitants anticipated the storm and left the islands as quickly as possible.  By now the hurricane was turning more and more towards the north. It moved parallel to the coast for about one hundred miles before making landfall near Savannah, Georgia on August 27th.

Reports from the time say that wind during landfall was around 120 mph making it a Category 3 storm.  The hurricane passed north over South Carolina on August 28th and moved up the U.S. East Coast before becoming extratropical over Atlantic Canada.

Although the hurricane was devastating, the American Red Cross did not arrive until October 1st.  This was the first major hurricane relief operation ever undertaken by the Red Cross. 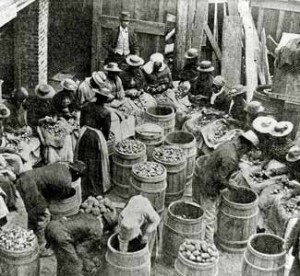 The city of Beaufort was covered in debris, making movement through the main streets nearly impossible. To add to the chaos, hundreds and maybe thousands of refugees were said to have migrated to Beaufort searching for food, shelter, and clothing.  All storehouses were ordered to close, and distribution was made under a ration system through distribution centers. After the Red Cross arrived, a warehouse of clothing and food was started in Beaufort to provide services to the affected.

Relief efforts were impeded by a second Category 3 hurricane that struck just north of the area, near Charleston, on October 13th. Eventually, the areas submerged by the Sea Islands Hurricane were drained. Clara Barton wrote in her autobiography of the Sea Islands effort: “The submerged lands were drained, 300 miles of ditches made, a million feet of lumber purchased and homes built, fields and gardens planted with the best seed in the United States, and the work all done by the people themselves.” 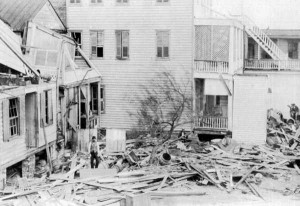 She said about 20,000 refugees were living in the streets of Beaufort immediately after the storm. In October, she moved the food distribution sites from Beaufort to the islands to lure people back home.  During a massive 10-month relief campaign, success was declared, with the Sea Islands population living in decent houses producing their own food again. Damages from the storm totaled to at least $1 million (1893 dollars).