Brimming with history and simmering with culture and a cool vibe, St. Helena Island boasts 64 square miles of personality.

Home to so many historic locations and the setting for lots of local cool spots and awe-striking views, lets take a look at 12 reasons (in no particular order) why we love this important local sea island.

Coffin Point & the Avenue of Oaks

Coffin Point Plantation is a historic plantation house located off of Coffin Point Road. Once a prosperous sea island plantation, it’s estimated that the home was built around 1801, and like many early 19th century homes on St. Helena Island, it features a tabby foundation. Coffin Point has a very nice private beach area and everybody loves the visually striking 1/2 mile long ‘Avenue of Oaks’ that leads to the plantation house.  Adding a mystique to the area, Beaufort’s purported witch doctor Sheriff J.E. McTeer purchased the land in the 1950s and lived in the house, no doubt bringing his hoodoo magic with him.

This little swath of quiet, out of the way beach is a favorite among the locals. Located several miles down Martin Luther King Jr. Blvd. on St. Helena Island adjacent to historic Fort Fremont you may (or may not) find Land’s End Beach. A great spot to swim, fish or gather in the Beaufort sun, it’s a quiet spot only accessible by one road, or by climbing down a rock embankment leading from the grounds of the Fort.

Any given day will bring you a few locals, a few surf fisherman and a few out-of-towners who were lucky enough to stumble upon it. It always brings plenty of peace.

When you’re traveling to the southern end of the island you’ll find the Gay Fish Company and its fleet of shrimp boats docked in the windy creeks that cut through the pristine marshes. The quintessential Lowcountry sight to see, sometimes you’ll even catch them coming in or going out for the day.

Hidden in plain sight are three remarkable buildings that bear witness to a history of faith and self reliance. Built from wood, no more than 20 feet by 20 feet, the small frame houses are simple structures. Originally built during the pre Civil War era by plantation owners as a place of segregated worship, the praise houses became central points in the community in the ensuing years, as places of worship, but also a meeting places and even as self governing “court houses” for the self reliant African American community on St. Helena Island. As most relied on walking or riding to get anywhere on the island, having a community meeting place close to home was important.

The ‘littlelest church in the Lowcountry’

The St. Helena Prayer Chapel along Sea Island Parkway has been called “the littlest church in the Lowcountry.” The sign out front asks motorists to simply ‘pray as you pass’. The spot certainly shows off the character of the island and lets you see that the church and faith in daily life played a vital role in the building and shaping of St. Helena.

St. Helena Island boasts at least three working farms which sell their fresh produce and other items to the public right there on site. Barefoot Farms and Pasture Shed Farms are both located along Sea Island Parkway and offer a variety of goodies as the Lowcountry seasons change. Dempsey Farms on Sea Island Parkway also operates a family-friendly U Pick field where folks are welcome to come and pick their own strawberries and tomatoes. You will also find a dozen or so roadside stands popping up on the island during the height of the local growing season. Nothing beats fresh local produce grown right here in Beaufort’s soil.

St. Helena Island boasts several fantastic local restaurants. Enjoy authentic Gullah family recipes and taste the culture in your food at The Gullah Grub Restaurant in Frogmore and indulge in the goodness of local seafood at Morgan River Grill, The Foolish Frog and The Johnson Creek Tavern.  It’s awesome to be able to eat at a restaurant where the food on your plate is tied to the local culture, and is most likely all sourced from the island too.

Bet you never thought of that. 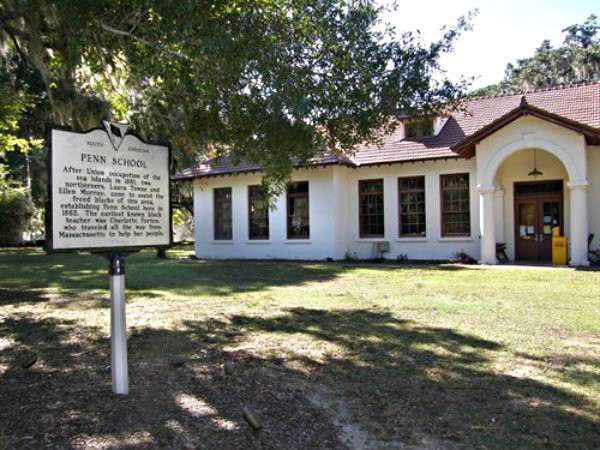 The Penn Center, formerly Penn School, sits on 50 acres of picturesque land with mossy Live Oaks and seemingly ancient buildings. In 1862 Quakers founded it as one of the very first schools for freed slaves. In 1974 this incredibly significant African American historical institution became a National Historic Landmark District. The Penn Center is considered to have had one of the greatest positive impacts on African American education and the preservation of the history of the Gullah Geechee people. It had a notable impact on the overall lifestyle of formerly enslaved. Not only were the men and women in the area educated and thereby empowered by knowledge but they were also taught a trade, and different ways to make a fair living, own and steward land and lots more.

Because of the work done by the founders and participants of The Penn Center, St. Helena Island still has a rich and deep rooted Gullah cultural influence. It’s a loved and preserved way of life that we are thankful to get to witness.

In the mid summer, beautiful sunflowers stretch as far as the eye can see in the sunflower fields of St. Helena Island. Located off of Tornado Alley at the south end of Sea Island Parkway, the fields glow a golden yellow and make for fantastic photos and beautiful memories. The property is private, but in perfect southern-standard, the owners are good to folks stopping by for a minute…as long as they are good to the land and to the sunflowers in return.

Located at Land’s End, Fort Fremont is a Spanish American War fort built in 1899. Luckily the war was a short one and the Spanish never made it to St. Helena or Port Royal Sound, and no shot was ever fired from the fort.  No threat, or call-to-arms was ever even made. Deactivated as a military installation in 1921, beautiful, eerie and mysterious, and lying right along the water, the fort’s grounds and battery are open free to the public and is listed on the National Register of Historic Places.

Did we mention it’s haunted?

In the 1700s, the main church of Beaufort was too far away for the many planters who lived on the island to travel back and forth to worship, so the Anglican Church established the Chapel of Ease to help the families attend church on a regular basis. Built in 1740 and made of tabby, the chapel served the area until Union troops came ashore in November of 1861.  On November 4th, 1861 Sunday services were interrupted by a messenger who brought news of the impending invasion of nearby Beaufort by Union troops.  With the arrival of those forces in 1861, the church never again regained its stature. The church was burned by forest fire in 1886 and it was never rebuilt.

It still stands along Martin Luther King, Jr Blvd as a wonderful reminder of an extraordinary era.

Being on St. Helena Island can be like going back in time. The island has a simpler feel, one rooted deep in the home. It’s a place where folks know each other and kids grow up playing outside. Stop for a chat at one of the fish markets and ask how the season is going. You’ll be met with the conversation you’re looking for. Stop by a roadside produce stand and learn about the local history of sweetgrass baskets or even learn how bottle trees are made.

Stories are free. That’s something that you will still find on St. Helena Island.