In August, a new Indian Restaurant will be opening in Habersham. The popular Spaghetti Club will be closing its doors and giving way to the new Vindaloo Junction; home to British East Indian cuisine including meat curries, masalas and chicken dishes as well as classic Indian desserts like kheer, a rice pudding with coconut, cardamom and pistachio, and mango stuffed with ice cream.

Serving their popular dishes at local farmer’s markets throughout Beaufort County, owners Kishan and Joanne Shah already have a following here in the Lowcountry.

Check out what Hilton Head Monthly had to say about their cooking and their new venture in an article published earlier this spring.

The aroma of spicy curries wafting through the air, the abundance of flowers, and the bustling crowds dressed in bright colors bring a vision of Mumbai or Delhi — all without leaving the Farmers Market of Bluffton, where people flock in search of authentic British-Indian food. Kishan and Joanne Shah, proprietors of Bhajee on the Beach, dish out favorites like dal makhani, palak paneer, vindaloo curry sauce, chutney and tikka masala, jeera and korma chicken dishes.

The locals know to get there early so they don’t miss out. The couple has built a tremendous following in Bluffton and also has a stand at the Port Royal Farmers Market on Saturdays. Chalkboard specials change from week to week, and the couple also sells frozen pints of Indian delicacies. The company name is a take on the well-received 1993 British comedy drama “Bhaji On The Beach.”

“After we ran a restaurant in central London, in Pimlico, for 20 years, we swore we would not do it again, but the response at the Farmers Market of Bluffton has been more popular than we thought,” Kishan says. “We first set out with selling crepes and then brought in our Indian food in 2012. Lots of people who pass through the farmers markets have never eaten Indian food. We have tons of spoons and we encourage people to taste our dishes — the conversion rate is very good.”

Bhajee’s menu offers meat curries, which tend to be from the north of India, and rice-based dishes, which are from other regions. “Chicken masala has become the number 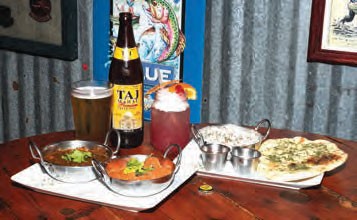 one take-out dish in the U.K. and that seems to be the trend here as well,” Kishan says. “It is no longer fish and chips.” Although the couple were not formerly trained, they have worked in a “hands-on” setting in their kitchen in London with people from all regions of India.

“Tristan and Kieron O’Grady have helped us tremendously by allowing us to prepare our dishes in their kitchen at the Big Bamboo Café on Hilton Head Island. We are so appreciative of their help and support,” Joanne says. Several dishes on Big Bamboo’s menu pay tribute to the Indian eatery, including “The Kish of Death Vindaloo Curry,” affectionately named after Kishan, who is known as the curry master, and “Nirvana’s Chick Pea Curry,” named after one of the couple’s three daughters. The husband-and-wife team works together by having their many tasks defined, yet having the flexibility to jump in as needed. Joanne does most of the prep and is the sous chef, while Kishan puts it all together.

“Kishan loves people and loves talking to people,” Joanne says. “I am more the back of the house.”

Plans are in the works to open a new restaurant, Vindaloo Junction, which will allow the couple to expand their menu and enable them to offer classic Indian desserts like kheer, a rice pudding with coconut, cardamom and pistachio, and mango stuffed with ice cream.

British-Indian cuisine has become wildly popular over the past few decades in the U.S. and is now considered mainstream by many who enjoy the complexity and combinations of sweet and sour, highlighted with various degrees of spice. The cuisine also is getting attention thanks to celebrities like Madhur Jaffrey, award-winning actress and author of “Curry Nation: Britain’s 100 Favorite Curries” and several other popular cookbooks.

“I think people are changing,” Joanne says, “and I definitely see a shift — young people are much more conscientious about what they eat. The vegan and vegetarian market is experiencing huge growth. The benefits of the spices are remarkable. We make everything from scratch, our dishes are gluten-free, with no thickeners, and use sea salt for the proper alkalinity. We use lots of turmeric in most of our dishes, along with generous amounts of coriander, garam masala and cumin and grind our own spices, which makes them taste much fresher.” One of the newest menu items is garlic chili with shrimp — paying homage to fresh Lowcountry seafood with inimitable Indian flair.

Originally published Spring 2016 by Hilton Head Monthly. Written by Carrie Hirsch/photo by Butch Hirsch. Since 1985, Hilton Head Monthly magazine has been the leading resource for getting the most out of life in the Lowcountry. Check them out at HiltonHeadMonthly.com